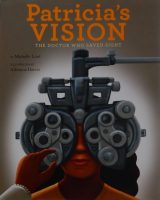 Here’s a super STEM picture book biography by Michelle Lord, of an inspiring African American woman, Dr. Patricia Bath, who followed both her passion and her vision to become a doctor and change other people’s lives by restoring their eyesight by means of tools that she herself had invented, tools that included lasers to remove cataracts.

From her childhood, (as a young child having seen a blind man begging on the street in Harlem in the 1940s, and pondered on how and why it could have happened), Patricia was a girl with a great and growing curiosity. After qualifying as a doctor, she “decided to get the training, education, skills set so I could achieve miracles” and that is precisely what she did, believing that “eye sight is a basic human right”.

She always looked for possibilities where others saw only insurmountable walls, and through her tenacity and determination managed to do what had never been done before often against her naysaying fellow doctors who hadn’t the imagination she possessed to look beyond the information given.

Through her entire life, even in retirement, this awesome woman kept her goal firmly in her sights and when climbing Mount Kilimanjaro, she visited a school classroom wherein blind children received their education in a classroom without braille books. On her return home she sent computers to that Tanzanian school so that the pupils could use their fingertips to read braille computer keyboards; this she called “Computer Vision”.

What an incredible woman and what an awe-inspiring book, made all the more so by the inclusion of direct quotations from Dr Bath and animated illustrations that show both emotion and scientific details. A terrific tribute, and a splendid way to introduce young readers from all over the globe, to this medical hero who died last year.
(There’s also a timeline, a note from the author, a further page about Dr Bath and a bibliography.) 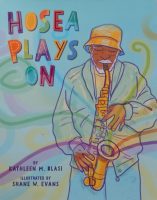 Both author Kathleen Blasi and illustrator Shane Evans celebrate the street musician Hosea Missouri Taylor Jr. in their fictional homage of a story of a day in his life, when he boards the bus and goes to his favourite spot, Rochester Public Market.
There he would take out his saxophone and play amid the hustle and bustle. On this particular day we see him passing a boy raking leaves who pauses in his work to pretend play using his rake. 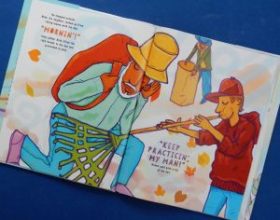 Once in the market passers by are entranced by his music and some drop money into his saxophone case; one girl is moved to dance,

their harmonious double act continuing until the rain comes down when she and the watchers, head for cover leaving Hosea to play alone.

At the end of the day, Hosea is thrilled to discover he has earned ‘enough money’ which we understand is the means to buy another instrument – a trumpet –

and in so doing, spread the love by donating it to the lad Nate, he’d spoken to in the morning. Then they play a lovely surprise finale duet.

The vibrant artwork is wonderfully uplifting: Hosea’s passion for music and its power shines out and the story is enormously, joyously heart-warming.

An author’s note explains how the musician’s goal was to keep the neighbourhood children in positive ways. To this end he bought instruments for youngsters and offered them free music lessons: a true advocate for learning through music.

Recommended for all who want to share, or inspire others with the joys of music and of giving.