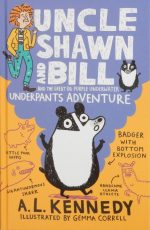 What on earth is causing all those mysterious Purple Bottom explosions and creating great alarm with regard to underpants the world over?

There’s surely one person who knows how to deal with a crisis such as this Particularly Purple one: look no further than Uncle Shawn, plan or no plan.

There is a plan though of sorts; it involves leaving the farm to the llamas and embarking on an adventure to find and save the Living Fish Tree. All it takes, surely, will be several pairs of Undersea Boots, a plentiful supply of powdered undersea air, buckets (to go over heads) and a bit of bravado.

There’s an encounter with Timothy the shark, one of the Great White variety (apparently Uncle Shawn has saved the creature’s life back in the day). Let me say here that sharks’ mouths can, when needed, be extremely useful means of rapid transportation particularly if you need to get from Scotland to the Pacific Ocean. 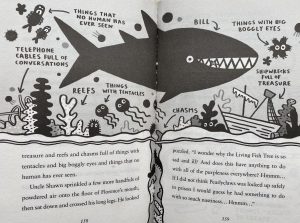 They’re also a pretty decent place to consume a lunchtime sandwich should you feel a tad peckish, oh and the tongue’s a suitable place for a game of snap and while so doing discussing the likelihood of the nefarious Sylvester Pearlyclaws being behind the massive, ever increasing, purple problem.

But is this a problem too large even for Uncle Shawn et al? I for one would hate to be a story spoiler so I’ll leave you on tenterhooks and a tad entangled in the hope you’ll get hold of a copy of this delicious daftness served up by A.L. Kennedy, garnished by Gemma Correll, and discover for yourself.

This is the third title in Costa award winning author A.L.Kennedy’s series starring Uncle Shawn, his best pal Bill Badger and a cast of other larger than life, lovable and not so lovable characters.

It’s as superbly bonkers as the title indicates and had me spluttering with laughter on pretty much every page, both at the story and Gemma Correll’s splendid, liberally scattered illustrations of villains and goodies.

Early on in the tale we learn that Sky (one of the twins) has wished herself invisible and no matter how hard she tries to unwish her invisibility – which has distinct disadvantages – her second wish never comes true.

We also discover that Bill has fallen head-over-heels in love with a lovely lady badger (‘possibly the most gorgeous badger in the world’) going by the name of Miranda (although he doesn’t yet know that) and she seems as perfect as any creature could be. Romance is most definitely in the air. 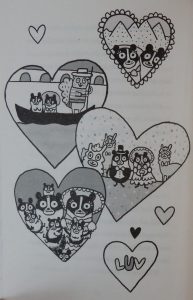 Could it be though that Bill is deluding himself about the desirability of Miranda Badger. Why is it for instance that she is liaising with a bald man with ill-fitting teeth, one Sylvester Pearlyclaws, a notorious criminal?

Is it possible that he is in fact the erstwhile toothless man who had recently emerged from the sea at Shoogeldy Bay swearing to get his revenge on Uncle Shawn et al.?

Meanwhile Sky is still struggling with her invisibility problem, so much so that Uncle Shawn suggests that the way to solve it is  to visit the moon, aka – so he says – the land of wishes; and the means to travelling to their lunar destination will be, wait for it, a giant-size iron soup dish.

The entire plot is fast moving and completely crazy. It totally snares the attention holding it throughout, brimming over as it does with exciting imagery – ‘Uncle Shawn reached down and just managed to catch the magnet, It was going faster than an oiled penguin sliding down an iceberg because it was very late for dinner.’ Or, ‘The monster rattled its fangs together so that they sounded like angry knitting needles and yelled …’. and ‘ Pearlyclaws ran away as fast as he could manage, his floppy feet sounding like old towels soaked in badness.’

Clearly the author has had as much fun writing this story as youngsters will have reading or listening to it; it’s perfect for solo readers or reading aloud. If it’s the latter your listeners will urge you to keep on … and on … to discover what happens next, but do make sure you stop frequently to share Gemma Correll’s wonderful visual images as well the author’s verbal ones.

In a word, priceless. 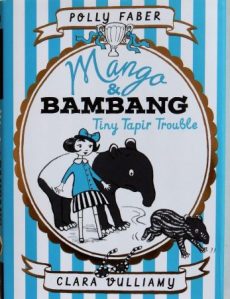 Mango & Bambang Tiny Tapir Trouble
Polly Faber and Clara Vulliamy
Walker Books
The tiny tapir referred to in the title of this, the third delicious Mango And Bambang collaboration between Polly Faber and Clara Vulliamy doesn’t crash onto the scene until the third story and when he does, my goodness he certainly makes his presence felt.
Before that though, Bambang and Mango visit the seaside to spend a special carefree, fun-filled day together before Mango’s new school term starts. At least that’s the plan, but it turns out to be a day packed with unexpected incidents culminating in the rescue of a toddler swept out to sea and an exciting parachute flight.
In the second story Bambang is feeling off-colour, his snout is blocked and he takes to his bed. Doctor Blossom the tapir specialist is at a loss to know how to make him better … 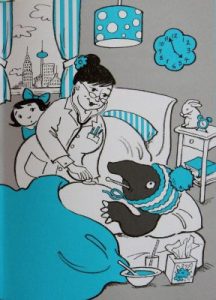 so it’s left to Mango, ably assisted by their pal George, to find a cure.
Even after his recovery, Bambang hasn’t regained his full bounce and so he and Mango do quiet things at home. But then a large parcel is delivered addressed to Bambang and any chance of peace and quiet immediately go out the window, for what should be inside but his small cousin Gunter – a cousin he didn’t even know existed. Small he might be, but he’s a force to be reckoned with and pretty soon, it becomes evident that two tapirs in one apartment is one too many. The trouble is Gunter has announced his intention to stay put and Mango appears to be enjoying his company rather too much. So much so that Bambang starts to think that perhaps he should be the one to go …
The final story sees Mango participating in the City Chess Tournament and one of the other competitors is the boy who’s been champ for the past three years. Seemingly though – at least to Bambang – something strange is afoot.

By the end of the book, Bambang has come to a very important understanding about family – it’s not about who you look like or where you started; true family are those you belong with – those who make you feel most completely yourself, no matter what.
Full of warmth and humour, these stories are perfect for those readers just starting to go solo.
Another favourite character returns in a brand new adventure: 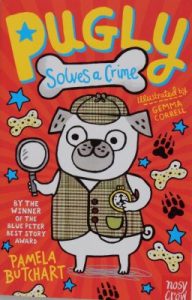 Pugly Solves a Crime
Pamela Butchart and Gemma Correll
Nosy Crow
When Pugly learns that Big Sal the guinea pig has been ‘GUINEA PIG-NAPPED he dons his detective hat and turns PUG-DETECTIVE. But who’s responsible for this dastardly crime? Perhaps it’s Glitterball the Poodle who has come to live next door – Pugly doesn’t trust poodles. Or could it be someone else? Time to enlist the help of super smart cat, Clem. Off go the two of them in search of clues …
With plenty of wonderful illustrations from Gemma Correll … 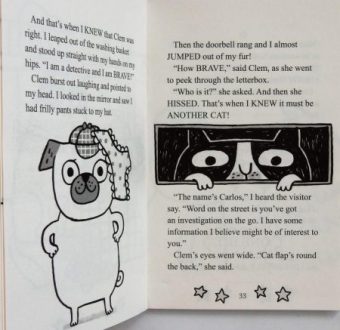 this crazy tale is sure to bring plenty of smiles to the faces of young readers; in fact, there’s not a spread that didn’t make me giggle to myself.