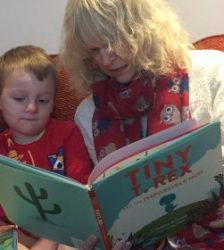 Daft and sweet sums up this story of one very small T. Rex and his enormous challenge.

Tiny, as he tells us at the outset has tiny arms and a strong desire to cheer up his stegosaurus friend Pointy by giving him a hug.

Determined to overcome his design fault and bestow a comforting embrace upon his best pal, Tiny consults various members of his family. His father suggests the solution might be a mathematical one: ‘Rexes are thinkers, not huggers.’ he proffers.
Auntie Junip – a yoga buff – suggests balance (along with a healthy drink of cucumber juice), offers the best means of problem solving.

Thank goodness then for his mum, for now Tiny is both battered and lost until she discovers him and gives some words of reassurance about his being creative, kind, brave and big-hearted.

It’s siblings, Trixie and Rawie that have the most useful suggestion: ‘To do the impossible you must plan and practice.’

However well intentioned this advice – and Tiny is ready to embrace it – the practice doesn’t go so well for the little guy.

And his final hug is a huge error although he does make an important discovery while airborne.

All ends well, though to reveal what happens will spoil the compassionate finale.

Who can fail to admire Tiny with his determination not to let his physical limitations get in the way of his big-hearted instincts?

You might be surprised to learn of a gang of dinosaurs running a farm unless you happen to be familiar with Penny Dale’s dinosaur brigade. In which case you’ll already know that these prehistoric beasts can take on all manner of unlikely roles so farming is no challenge too far despite Dinosaur Farm being an extremely busy place.

There are fields to plough – up and down, up and down as well as sheep that need feeding. 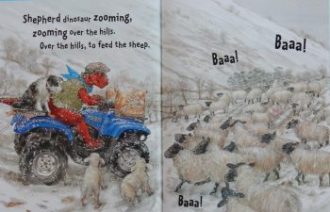 A group of noisy dinosaurs are building a fence, bang, bang banging in the wooden posts while a rather pongy Allosaurus is muck-spreading. 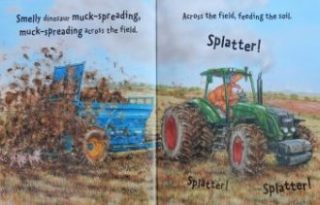 We see two of the team making the hay into bales and others digging up the muddy carrots.

When the sun comes out, it’s time to get out the combine harvester and cut the corn. Then there’s the apple harvest to pick – red, juicy fruits aplenty – yum, yum.

Finally all the produce needs cleaning and packing: it keeps the entire group of ten working late into the night but what is all this hard work for?

Where could they be going next morning with their trailer loaded? There’s certainly excitement in the air …

Told as usual in rhythmic language, the story is punctuated by contextually apt exclamations your little ones will love to join in with, while Penny Dale’s elaborately detailed pencil and watercolour scenes will absorb them visually. They’ll likely be amused at such humorous touches as the ‘Haymaking dinosaurs …’ scene that shows one of the two propped up against a bale, seemingly snoozing.