Come with me to 32 Paradise Street, Notting Hill, London where something wonderful unfolds.

In her inimitable style, Shirley Hughes presents the story of a friendship that develops between a boy, Lewis Brown, and an angel.

One night this angel alights unnoticed on the roof of the building wherein Lewis lives with his parents, spends the night there and next morning shakes his wings causing a golden feather to fall, landing on the sill of the window through which Lewis is peering.
(Having an underdeveloped leg, Lewis prefers people watching to interpersonal encounters.)

The boy notices the feather, knows it’s something special and clambers up to the roof to investigate.

What he sees is an angel with a beaming smile. Lewis pours out his heart to the being and thus begins their relationship. 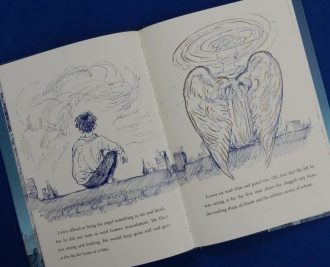 The two walk together through the streets of west London, the angel wearing an overcoat belonging to Lewis’s father.

We never see its face, but alongside the angel Lewis feels alone no longer and gradually things change for the better at 32 Paradise Street.

For fear of spoiling the story, I’ll say little more other than that one night Lewis has the experience of a lifetime and things continue to change for the better both in his life and those of other people.

This is such a sublimely beautiful book; it’ll make you feel uplifted and having read it and wondered at Shirley’s illustrations with those touches of gold, you’ll want immediately to find others to share it with. I certainly did.