This is the fourth graphic novel style Narwhal and Jelly book and it’s as brilliant as ever.

It begins with an encounter between best pals Narwhal and Jelly, and newbie Otter. Narwhal declares self-professed ocean explorer, Otty, “Otterly awesome!” Ever-sceptical Jelly on the other hand, is less enthusiastic and disinclined to believe some of his stories. 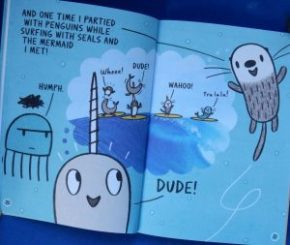 His enthusiasm wanes further when Narwhal invites Otty to accompany him on an adventure. “Really? Does this mean we’re friends?” Otty asks. “Pretty much!” comes the response.

Guess who is jealous and feels left out. So much so that he decides to seek out a new friend; not very successfully
and eventually he befriends a rock, he names Rocky.
They play ‘oodles of awesome games’ that Rocky excels in ‘Go Fish . . . Marco Polo . . . Staring Contests’ as Jelly informs Narwhal and Otter when the latter finally hunt them down.

You’ve probably surmised that it was never Narwhal and Otter’s intention to sideline Jelly and he’s over the moon – or rather, the rainbow – to be invited to join them on the ‘awesomest adventure ever’. ‘Seas the day’ guys!’

As always Ben Clanton’s illustrations are terrific – whimsical, witty, wonderfully expressive. His text has its measure of splendidly groanworthy puns and there’s the usual sprinkling of animal facts as well as another Super Waffle and Strawberry Sidekick offering, from Jelly and Rocky on this occasion.

Plunge in and relish the three tales and more in this friendship tester; it’s a laugh-out-loud winner once again.

This book, in graphic novel format is an adaption by children’s book author Sarah Howden, of Cordell Barker’s 2009 animated film of the same name.

It begins with a cow strolling on a railway track along which a passenger train is speeding. It’s a disaster waiting to happen.

The engineer, or Captain as he likes to be called, is distracted by a fuzzy object that has been found by the Fireman and belongs to the Lady. Keen to impress her, the engineer shuts the fireman up and fusses over the dog only to receive a bite on his finger.

The train continues dashing along the tracks now out of control. The fireman is concerned – where is the Captain? But nobody else is bothered. The fuel gauge is dangerously low: the passengers provide alternatives to coal; the train climbs 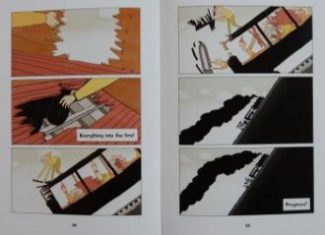 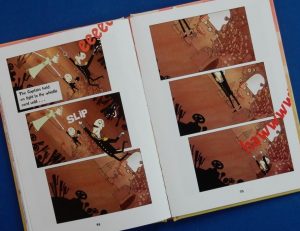 and saves the day – or does he?

What you get out of this allegorical tale depends considerably on what you bring to it and with re-readings new understanding emerges. Assuredly though it’s full of action and wry humour, and at least it appears there might be one happy ending.

That though, won’t save everyone – for that, collective love is required and as Auden said in September 1,1939, ultimately ‘ We must love one another or die.’

In her familiar graphic novel style, Helen Bate tells a powerful story of how two children, narrator Maisie and her friend Dylan, set about helping their beloved friend and neighbour Granny Moon as she shows signs that all is not well.
Granny Moon has looked after the children during holidays for years filling their days – rain or shine – with fun and adventure. 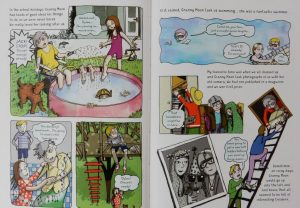 One day though, things start going wrong.
First Granny Moon is talking about a sister Julia she doesn’t have and later the film about aliens she takes the children to scares Dylan and they have to leave.

As Christmas approaches, things get worse. At the school concert Granny causes disruptions and other children start making fun of her.

Time passes but there are further problems. Granny Moon convinces herself that a little girl is trapped in her radiator and then Dylan’s dad notices her unusual behaviour and is doubtful about whether she should still be allowed to look after his son.

Maisie and Dylan then worry about the fate of Granny Moon and her beloved dog, Jack; will Angela decide to put her in a care home? Worse, the friends return home late from school after a café visit with Granny Moon to find a fire engine outside and fire-fighters waiting for them. Thankfully though, there’s no serious damage.

Next day Angela arrives and is extremely troubled by what she finds. She decides there’s only one thing to do. Granny Moon’s house is put on the market and happily it’s not a care home that she’s going to but Australia to live with Angela and her family.

Three days later, fond farewells are exchanged and Angela and Granny depart. A certain animal isn’t accompanying them though, he has a new home – next door with Maisie who now has a companion to share memories about her erstwhile owner with whenever she needs.

The final page lists organisations that offer help for people with dementia, their families and carers.

Love and devotion radiate from the pages of this intensely moving story (based on actual events); but it doesn’t gloss over the enormous challenges those caring for someone with dementia are likely to face. Rather, it offers young readers an opportunity to better understand something of the condition and perhaps be better prepared should they encounter someone living with it.

This is a book that deserves to be in every school and should be read in all families. Particularly, as I was reminded by a charity worker from The Alzheimer’s Society who stopped me as I left Waitrose recently that while I might not know anybody with Alzheimer’s, over a quarter of the population knows someone who has this form of dementia alone.

In Unicorn of the Sea. Ben Clanton introduces readers to Narwhal, a self-aggrandising creature.

In the first of three sub-aquatic adventures, while cruising in ‘new waters’ Narwhal encounters a jellyfish and despite doubting each other’s realness, the two interrogate one another, forge a friendship and eat waffles together.

The second tale sees the two involved in forming their very own ‘podtastic’ pod of awesomeness that includes other ocean buddies – shark, turtle, blowfish, octopus and of course – though he’s very nearly left out – Jelly, each of which receives a tusk tooth in honour of the occasion.

My favourite of the three stories is the book’s final one wherein Narwhal introduces Jelly to his ‘favourite book in the whole wide water and probably the rest of the universe too!’ It’s a book without any words or pictures and Clanton provides two blank pages for maximum effect here. Narwhal tells his pal that ‘it’s an imagination book … you’ve got to pretend.’ Brilliant! And so thinks Jelly too for having tried it out, he wants to borrow it right away. 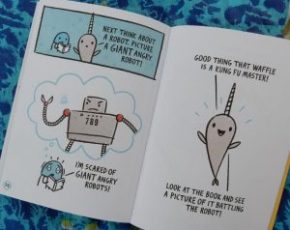 With its splendid dialogue, this is irresistible, sub-aquatic bonkersness of the first order delivered in graphic novel style for young readers. There’s even a silly narwhal song so sing and clap along to.
This twosome is up there with Arnold Lobel’s Frog and Toad, and Mo Willems’ Gerald and Piggy.

In Super Narwhal and Jelly Jolt, Narwhal swathes himself in superhero-ness assuming a secret identity and appointing a sidekick (Jelly Jolt) but despite this, he seems to lack the necessary superpowers, so he thinks. Nonetheless fuelled by waffles – the friends’ ‘super weakness’ – he sets about helping a star(fish) to become a cosmic being. This involves cannon blasting and wishing (I won’t say which, if either, works).

There’s also a comic – no prizes for guessing it’s a waffle-themed one, created by none other than Narwhal and Jelly themselves.

And then in the final tale here, Narwhal finally does discover his very own superpower; it’s a super-important one too, discovered by an act of altruism towards crab.

Once again the whole thing – super sea creature facts and all – is super-brilliant and full of heart. I just love how it effortlessly demonstrates the importance of friendship, of encouragement and that all of us – if we look hard enough –possess a world-improving superpower. With laughs aplenty and the most adorable illustrations, this book is an unmissable gem, not only for young readers, but adults too.