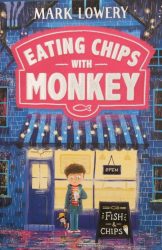 Ten-year-old Daniel absolutely loves fish and chips, almost as much as he loves his soft toy Monkey; and when the two are part and parcel of the same experience – like his family’s annual Chip Shop Championships, then things really can’t get much better.

They can however get a whole lot worse for during a trip to find the winning chip shop one November day, the lives of Daniel and his family are shattered by a terrible accident when the boy rushes out of the shop straight into the road.

Following his accident Daniel becomes withdrawn while members of his family struggle to cope with the accident’s impact on their own lives.

Then Dad decides to stage a kidnap or as he put it ‘just borrow’ the entire family and redo the Chip Shop Championships mentioned in Daniel’s notebook and in an effort to stimulate the boy’s senses revisit the five contenders. That entails driving all over the country from Norfolk to Bedfordshire, to Yorkshire and thence to Camden Town and finally King’s Cross.

Mark Lowery has created a story that is highly affecting and also funny – think chip-guzzling giraffe, Grandma ‘seizing the day’ with a Major, and designer food. His characterisation of all family members is such that each one truly comes to life on the page, while the portrayal of Daniel (who has autism) is empathetic and might surprise readers who have little of no experience of what this might mean in terms of behaviours.

No matter which way you like your chips served, you cannot but be swept up in this highly unusual family drama.

This is the third episode in the life of Stan. All the space enthusiast boy wants to do is to be left in peace so he can watch the total solar eclipse that’s coming up soon but his younger brother Fred has a much more important mission that threatens to eclipse any plans that big bro. might have for the near future.

Fred has donned an eco-warrior hat and is determined to solve the plastic pollution crisis. Moreover he wants everyone else to get involved too.

Add to that Gran’s big announcement regarding her and a certain salsa instructor as well as a certain umbraphile named Roberta Macklin who Stan is determined to meet.

And what’s all that about a certain King prawn vandalising the local supermarket?

Readers will be amazed at how all these threads are woven so neatly together by the author in such a highly entertaining manner; not only that, for Chris Judge’s inventive infographics

are an integral part of this SUPERb adventure that is once again much more than the SUM of all its parts.

Go Stan, go! and, go Fred go! The planet needs you both.