Highly experienced yoga teacher, Michael Chissick has created another absolutely smashing book, for those who teach yoga to youngsters, specifically those with autism, although much of what is included here would work well with neurotypical children too.

At the outset Michael states his case explaining that perfection is not on the agenda, so an adult-style class approach is inappropriate as is chanting.

A plan is vital; intuitive teaching won’t work with children on the autism spectrum: I know from experience they need a structure and that is what the book provides, whether the teaching is done in a mainstream school that includes children with autism or a special school where everyone being taught is on the autism spectrum. If the latter is the case, Chissick suggests three groups(his are named after trees) which can be fluid but are based on the degree of challenge both students and the teacher of the class face.

He then goes on to offer four different lesson plans – one being suitable for all students (universal) and three others – and each of the latter is progressive.

Much of the remainder of the book contains the differentiated tried and tested games, thirteen in all, some of which require additional resources that are flagged up at the outset. There are also sequences such as the Sun Salutation and some sequence games, followed by the postures themselves including ‘good sitting’ 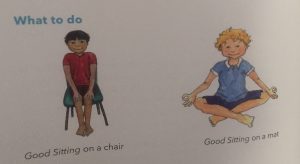 (illustrated by Sarah Peacock whose work will be familiar to those who know Michael’s other books such as Ladybird’s Remarkable Relaxation and Sitting on a Chicken .)

And of course, there are ideas for the vital ‘calming stage’ and final relaxation.

There’s a chapter on teaching yoga to children who have ASD in a mainstream classroom, followed by some case studies and extremely useful visual resources.

A wealth of experience has gone into this book: it’s a veritable treasure trove for anyone who teaches yoga to children, whatever the setting, but especially children with ASD.