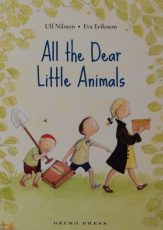 Told without a vestige of sentimentality is All the Dear Little Animals, a story from Swedish author Ulf Nilsson and illustrator Eva Eriksson. The first person narrative voice is that of one of the participant founders of an unlikely and short-lived enterprise.

It all begins when Esther, another of the founders, discovers a dead bumblebee. Having nothing better to do, she decides to dig a grave for it. Her companion – the narrator – offers to compose an appropriate death poem and they bury the bee in a secret clearing in the woods.

The team of two becomes three when Puttie, Esther’s little brother gets involved. He finds the whole procedure of the next burial – that of a mouse – extremely sad, but soon overcomes his greatest concerns and thus Funerals Ltd. is up and running. Esther digs, the narrator pens poems and Puttie cries. 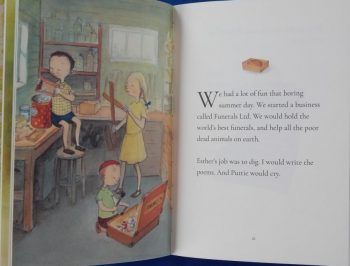 A suitcase containing a shovel, various sized boxes and other funeral accoutrements (including ‘’ice-cream sticks for small crosses/ Big sticks for big crosses) is packed and the three spend the day providing a service for the pets and domestic animals of family and friends.

By the time darkness falls, all manner of creatures including finally a blackbird 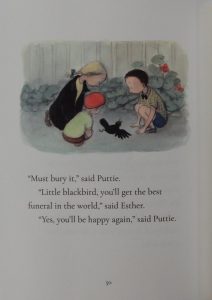 have been duly interred before he children decide to call it a day. 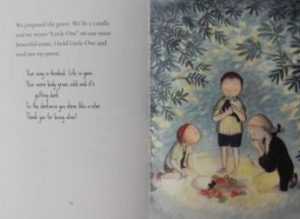 ‘Another blackbird sang a beautiful song. I got a frog in my throat when I read. Esther cried. We all felt very reverent. Sadness lay like a black quilt over the clearing. And Puttie went to sleep.’

That’s not quite all though, for after the closing verse of the narrator’s poem comes an absolutely wonderful throw away finale: ‘The next day we found something else to do. Something completely different.’

Both playful and sad, with a touch of whimsy, the combination of text and illustration is just right for those starting out as solo readers, as well as for sharing. More importantly though, the book offers a way to talk about death with young children from any faith tradition or none, that should help them transcend feelings of sadness.

Although written from a child with a Christian world view’s perspective of death, if shared in an education setting, the book could open up a whole topic on religious rituals. 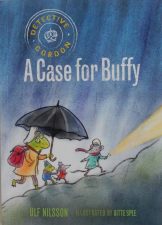 Detective Gordon (a philosophical elderly toad) returns with a final case to solve. This, the most important one in his whole career, sees him and young detective, cake-loving mouse Buffy attempting to solve a mystery that takes them to the very edge of the forest as they endeavour to discover the whereabouts of Buffy’s missing mother. In their search, they’re aided by two very new recruits, 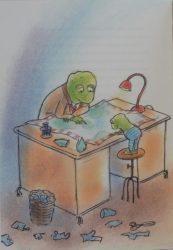 who accompany the detectives, as they follow clues across a mountain and over water, all the way to Cave Island.

There’s an encounter with Gordon’s arch-enemy, a wicked fox who might or might not make a meal of one of the detectives.
All ends satisfactorily and there’s a sharing of cake – hurrah!

I’ve not encountered this charming series before but this one is a gentle little gem made all the more so by Gitte Spee’s whimsical illustrations.

Read aloud or read alone, either way it’s a delight. 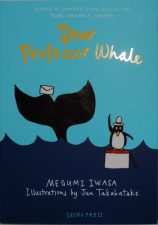 Professor Whale is now the only whale remaining at Whale Point and thus feels more than a little bit lonely. He remembers the days when he was surrounded by friends and they participated in the Whale Point Olympics.
In an attempt to find some new friends the Prof. sends out letters to ‘Dear You, Whoever You Are, Who Lives on the Other Side of the Horizon’ His only reply comes from Wally, grandson of an old friend. After getting over his initial disappointment, Professor Whale is inspired, to organise, with Wally’s help another Whale Point Olympics. It’s full of exciting events such as The Seal Swimming Race and The Penguin Walking race and there’s also a Whale Spouting Contest.

Friendship and kindness abound in this gentle tale, a follow-up to Yours Sincerely, Giraffe, which I’m not familiar with. However after enjoying this warm-hearted story, I will seek it out. With it’s abundance of amusing black and white illustrations, 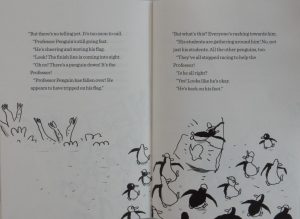 It’s just right for those just flying solo as readers. 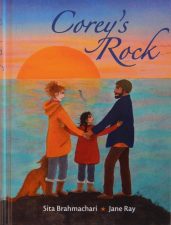 After the death of her young brother Corey, ten year old Isla and her parents leave their Edinburgh home and start a new life in the Orkney islands.
So begins a heart-wrenching story narrated by Isla wherein she discovers an ancient Orcadian selkie legend. 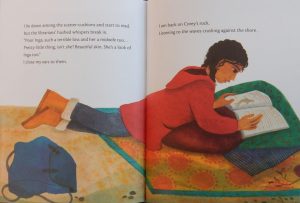 This becomes significant in her coming to terms with her loss and adjusting to her new life.

Equally beautiful are Jane Ray’s illustrations that eloquently capture the tenderness, beauty and the magic of the telling. 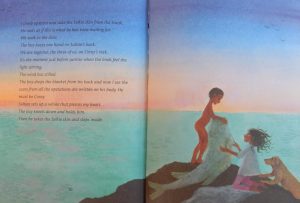 This is a treasure of a book that deserves a wide audience and at the right time, could help grieving families come to terms with their own loss.