In this narrative non-fiction picture book with its lyrical rhyming text and brilliant paintings, author Janet Lawler and illustrator Timothy Basil Ering present a superb portrait of a walrus in his icy environment, taking readers right up close to the creature .

He plays on an ice floe, flopping and plopping into the chilly water where he twirls and whirls with swirling flippers, kept warm by the layer of fat beneath his coat. Then, having found some clams on which to feast, he slurps until he’s full when it’s time to tease that playful puffin before, using his powerful tusks, he heaves himself out of the water and onto the ice.

‘Waddle. Walk. Slap! Slap!’ he lumbers, till he meets up with a pack of fellow walruses, snuggling up among them.

Sometimes however he get involved in a crashing, tusk-bashing fight with another walrus till fight over, he emits a variety of exciting sounding calls and songs that echo across the frozen landscape.

I imagine young listeners will love to copy these sounds as you read.

Come the spring, baby walruses are born. Noting is said in the main narrative about mating but the author includes information about this in a final double spread of additional walrus facts.
Thanks to his chosen colour palette, you almost feel the chill as Ering’s paintings zoom in on the action documenting every move the creature makes and its every change of mood, holding readers totally captivated throughout.

The Almost Fearless Hamilton Squidlegger
Timothy Basil Ering
Walker Books
By day, young Hamilton (with his trusty wooden sword) can take on all the threatening -so he imagines- creatures in the swamp be they fire-breathing frackensnapper, clawed skelecragon or twining bracklesneed. Come nightfall though, all his bravado vanishes and Hamilton gives full rein to that fertile imagination of his and flees from his own muddy space and those same, now shadowy monsters, to take refuge in his secret hideaway. Each morning however, a newly fearless Hamilton awakes ready for more sneaking, wrestling and sword fighting. His long-suffering father on the other hand has tired of his son’s nocturnal habits and bakes him a super-dooper ‘double-decker grasshopper worm-cake,’ to be consumed at breakfast, in return for remaining a night in his own mud. Hamilton agrees to the deal, but then as dark rain clouds loom overhead and thunder booms, he begins to fret about the coming night.
Dad offers good advice – use the power of your mind positively, he tells Hamilton.
There follows a sequence of amazing happenings: a sea of pink lemonade gushes forth from a discarded TV, 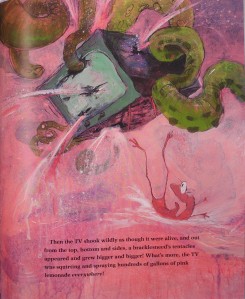 and upon that sea is a boat complete with striped sea bass chef. Hamilton scrambles aboard, said chef offers good advice, cooks pancakes 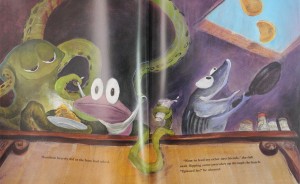 and the ship takes to the air, powered by – can you believe – the frackensnapper’s breath. Yes he’s aboard too as are the bracklesneed and skelecragon, though now the monsters are friendly.

During a breathtaking flight, son and father are reunited and there are individual cabins in which everyone beds down for the night including a now ‘totally’ fearless Hamilton Squidlegger.
Ering’s creatures are wonderful. With their googly eyes and spindly legs, Hamilton and his dad are frog-like in appearance; indeed the former positively leaps from the pages of the book. The contrast between the glowing colours of the splodgy, spattery backdrops and the scratchy etched lines of the characters is superb. Guess what happens on the final page … 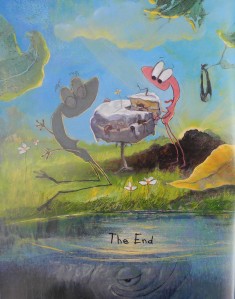 Florentine and Pig and the Spooky Forest Adventure
Eva Katzler and Jess Mikhail
Bloomsbury Children’s Books pbk
“Wooooooooooooooooooooo!” Can that awful sound Florence and Pig hear as they lie in their beds one night be the Growling Prowling Bogmog, they wonder; the same creature that dwells in the deepest, darkest forest. 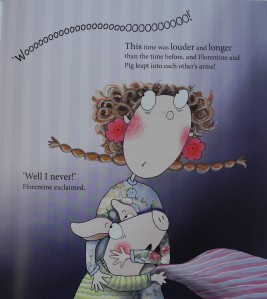 A plan is needed, a plan to discovers its whereabouts, so the friends pack their rucksacks (Pig’s with camping gear, Florentine’s with tasty treats) and march out into the forest. After trudging, tramping, hopping, hurdling, splishing and splashing, they suddenly hear alarming sounds – oh no. Don’t panic it’s only Pig’s rumbly tum. 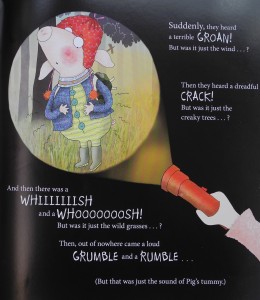 Supper and a singsong follow and then they bed down for the night. But what is that familiar sounding “Wooooooooooooooooooooooo!” and that enormous shadow, looming ever larger? Just an owl; back to sleep guys – that’s all it was, or …

Although new to me, this is the third adventure of Florentine and her porcine pal, two healthy food promoters who love to eat tasty treats and whose stories come complete with tempting-looking, healthy recipes and some craft ideas for young listeners to share with adults – after they’ve hunted for that Bogmog of course.
This combination of a fun story and cooking – two things young children love – is a winning formula: the recipes are clearly presented and look truly mouthwatering, the narrative contains some lovely, playful language and the mixed media illustrations are full of amusing details to discover.
Buy from Amazon

Bedtime for Tiny Mouse
Chae Strathie and Sebastien Braun
Scholastic pbk
Tiny Mouse cannot sleep: his head’s full of fuzz, his feet of fireworks, his knees are misbehaving, his tail twitchy and his ears excited so none of the suggestions his mum,

dad and big brother offer are at all helpful. Tiny Mouse turns to Grandma and at last, thanks to the soft moonlight and her soporific lullaby under the stars, Grandma Mouse is able to tuck up her sleeping grandson tenderly in his bed. Sweet dreams, little one.
A gentle, bedtime tale for the very young illustrated with appropriately playful scenes and sequences. 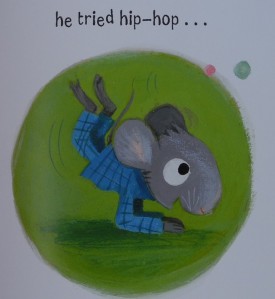 Buy from your local bookshop:  http://www.booksellers.org.uk/bookshopsearch