Rather than being awed by his mother’s talk of potentially deadly falcons, a crow chick is entranced when he sees the speed at which a falcon zooms through the air.

Come autumn, the little crows learn that it’s time for them to fend for themselves in the big, wide world. Excited and with his mother’s words “… if you stay curious, use your mind, and believe in yourself, there is no limit to what you can achieve” the little bird sets off one morning with the other young crows.
Convinced that there are wonders to be discovered, the little crow urges the others onwards till eventually they stop to spend the night in a lone tree.

It’s here next morning that one little crow makes a most thrilling discovery that is to change his life and that of his fellow crows. 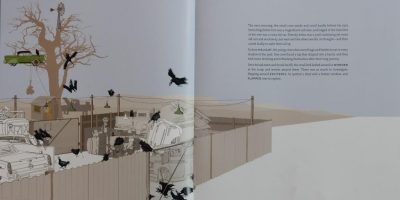 Below the tree is a junkyard full of abandoned vehicles and car parts as well as a shed full of tools, more car parts, trophies and most important, plans and a notebook containing drawings, diagrams and lists. 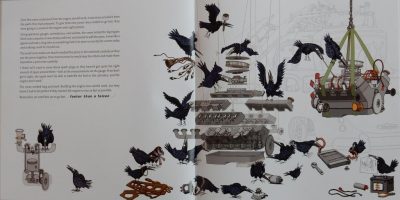 So begins the project to become the fastest bird in the world.

This is a book that makes nonsense of the notion some primary teachers adhere to that once children achieve reading fluency, they should no longer read picture books. Alan Snow’s illustrations are truly awesome – a combination of fine art and technical drawing with clearly annotated detailed inventories of the car’s and engine’s components and how  the internal combustion engine works as well as the formula for calculating the speed and more.

Mechanically minded adults, as well as older primary children and above, will be enthralled by both the story and the intricate technical details of the art. I wonder if Lewis Hamilton would go even faster with a feather festooned Mercedes?

What struck me immediately while reading about the amazing inventions in this book, is the crucial role of the imagination in each and every one of them; something all too many of those who’ve played a part in side-lining or cutting completely, creative subjects in schools seem to have overlooked or disregarded.
Without the power of imagination none of these ground-breaking ideas would ever have been conceived let alone come to fruition.

Weird and wacky-seeming, for sure: this book is brimming over with quirky, illustrated facts about all kinds of inventions and discoveries from penicillin to plastic-using pens; the matchstick to the microwave.

What about a nanobot so tiny it could swim inside a human body to perform medical procedures; 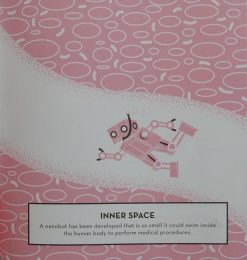 or non-melting ice-cream that retains its shape for hours .You can buy the stuff – it’s called Kanazawa – in Japan. 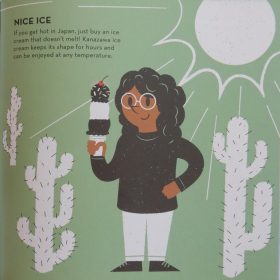 How super to have a pair of super-light, super-strong trainers made from spider silk that can be composted once they’re finished with.

Or perhaps a garment made of fabric that can be cleaned by holding it up to the light. Aussie scientists have manufactured such a fabric and it contains tiny structures that release a burst of energy that degrades stains; yes please.

Certainly the roads around the country could do with making use of the self-healing concrete developed by Dutch microbiologist, Hendrik Marius Jonkers. It uses bacteria to heal cracks in buildings and roads.

Even more surprising than some of the inventions themselves is the fact that they were accidentally discovered, penicillin being one, superglue another.

Hours of immersive, fun-filled learning made all the more enjoyable by author James Olstein’s quirky, retro-style illustrations on every spread. 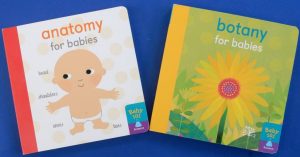 Here are two absolutely lovely board books that are part of the Baby 101 Science series.

Anatomy for Babies starts by introducing basic body parts such as head, hair and foot.
It then takes little ones inside to look at bones

and muscles, and back out to see the skin.

Next comes the brain, followed by the lungs and the heart.
The alimentary canal comes next with a quick look at digestion.

Thereafter we move to the outside again for a focus on the five senses. Each part introduced has a sentence describing its function.
The final spread celebrates the notion of growth and has a lift-up flap.
And don’t miss the opportunity to do the action song ‘Head, shoulders, knees and toes’ when you look together at the front cover.

Botany for Babies explores the world of flora starting, after a general celebratory introduction, with seeds of various kinds.

Roots and shoots and their respective functions come next and then an opportunity for some height comparison using a daffodil, a sunflower and a deciduous tree.
The following spread is devoted to root systems including some mouth-watering vegetables: it’s never too soon to introduce the idea of eating healthy veggies to little ones.

The focus then moves to trees of both the deciduous and coniferous kind, after which comes the role of leaves in photosynthesis (no that term isn’t used!).

Bees buzz merrily on the next spread where their role in pollination is mentioned.

A fruiting apple tree is shown bearing juicy red fruits and there’s also a cross section where you can see the seeds, which takes readers full circle back to seed dispersal on the final spread. There too is a flap to lift with a surprise beneath.
Adding to the enjoyment, insects and other small creatures form part of the illustration on almost every spread.

Both books have terrific STEM potential as well as being wonderful for language development; it all depends on the adult mediator.  Thoroughly recommended.

Hot on the heels of Ada Twist, Scientist and Rosie Revere, Engineer comes another young girl character with a passion.
Meet Audrey, inquisitive and an inveterate fiddler with things, who, having declared to her teacher, her intention to be an inventor, sets about achieving her ambition.

and even more disastrous next efforts, Audrey miserably declares herself “the world’s worst inventor!”

Luckily for her, her dad, far from making disparaging remarks, encourages his daughter to learn from her mistakes and carry on trying. Wise advice.

It works too, for it isn’t long before Audrey is inventing again, but this time she’s extra careful at the planning stage, the constructing stage and the testing stage. Dad cannot wait to see the new invention.

Will it work to the satisfaction of all though? It’s certainly wildly inventive, and sophisticated; but will it deliver?
Crazy, but enormously enjoyable and an inspiration to young female would-be scientists, technologists and engineers: Audrey demonstrates just how much enjoyment the STEM curriculum offers and Rachel Valentine’s narrative reminds children of the importance of persevering, and of following your dreams.

There’s a slight touch of the Heath Robinsons about some of Katie Weymouth’s zany scenes of Audrey at work on her inventions, and she also adroitly captures the close and supportive relationship between father and daughter. 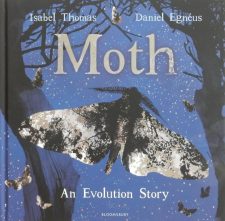 Interestingly this is the second picture book introducing adaptation and natural selection to children I’ve seen in the past few weeks – could a new trend be starting. I was first taught about these scientific ideas with reference to the Peppered Moth, the particular example used in this story, when doing A-level zoology donkeys ages ago, and now they’re part of the KS2 science curriculum – quite a thought.

‘This is a story of light and dark. Of change and adaptation, of survival and hope.’ So says science writer, Isabel Thomas in the opening lines of her narrative, a narrative that seamlessly interweaves both science and social history.

In the nineteenth century almost all Peppered Moths had light grey patterned wings that blended with the tree trunks and branches it frequented. 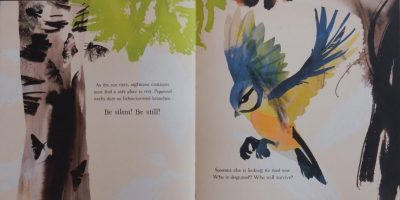 In this new environment, the light-coloured moths became easy to spot and were gobbled up by birds.
Darker forms of the insect were less conspicuous and more likely to escape predation and to breed whilst the lighter form became extremely scarce.

With the advent of the Clean Air Acts in the mid-twentieth century air pollution from smoke and soot was greatly reduced, trees and buildings were no longer stained. Now the dark moths were more conspicuous and less likely to breed successfully, though both forms of the moth can still be found.

All this, Isabel Thomas recounts in her dramatic, sometimes lyrical text that ends with hope. A hope which, as we hear in the final explanatory pages, might lead to other living things being able to adapt to the changes, including climate change, that we humans inflict upon our planet.

Daniel Egnéus’ illustrations are as lyrical as the text, embodying at once arresting beauty and veritas, and instilling a sense of awe and wonder. It’s rare to see such an eloquent science-focused book that also embraces the arts side of the curriculum.

According to the Oxford English Dictionary Jonathan Litton quotes at the beginning of this large format book, a hole is ‘a hollow place in a solid body or surface’. It then goes on to say ‘they are both something and nothing” – paradoxical hmm?

All manner of hole-related topics from caves to nostrils, and phloem to philosophical ideas are covered, the information being gathered under five main headings: Natural Holes, Manmade Holes, Animal and Plant Holes, Philosophy of Holes and Ordinary and Extraordinary Holes – the result, author Litton tells us in his introduction of ‘squirrelling and hoarding’ lots of kinds of hole ideas in a huge hollowed out hole. I like that notion.

The rest of the text is equally engaging as well as highly informative. I learned a new word – spelunker – meaning people ‘who visit caves, but without proper training’ – on the second spread.

as well as subterranean living, secret holes and buried treasure.

I enjoyed too, the idea of earth being like a ‘Swiss cheese under our feet!’ and I know many children will giggle at the mention of ‘bottoms’, which are included as an example of the location of holes within animals.
The topic of plant holes particularly fascinates me and there’s a spread devoted to some of the ways plants use holes.

Thomas Hegbrook has done a sterling job in providing illustrations for all the themes making every spread an invitation to delve deeper.

With its die-cut cover, the whole is a veritable treasure trove of holes, to be dipped into and rooted around in: you never know what you might find, but as the author says in his finale, what he’s covered herein is just a small sampling of a ‘hidden wonderland’; the rest is awaiting our discovery. I know I’ll never take a walk and think about what I see in quite the same way, having read this book.

Ada Swift is back with a STEM activity book that’s packed with exciting projects related to both the physical and the biological sciences.

All the time the text encourages children to add their own ideas, as in this tree observation page. 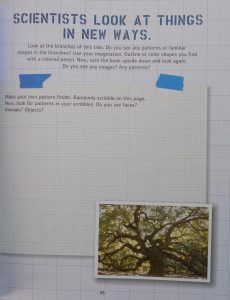 Or in the ‘Decomposers’ spread whereon readers are asked to write their own responses to ‘Why don’t colourful leaves pile up, year after year, until the trees are buried beneath them” Why do they turn brown?’
This is followed by practical activities and observations.

I could go on at length talking about the various activities, which are many and varied (over 40 in all) but will just mention a few: there are word searches, an energy game, tracking the phases of the moon, designing a vehicle that uses wind or solar energy or another form of renewable energy and watching seeds grow and recording related observations.

Very much hands-on, this is an ideal book to inspire youngsters from around 6 to become scientists like Ada Twist, indeed Ada’s very own story is told at the outset.

Thoroughly recommended even if you haven’t yet encountered Ada or her friends, Iggy Peck, Architect and Rosie Revere, Engineer.