Full of gill-slittingly silly stuff unrelated to the particular elasmobranchs of the title as well as plenty of real sharkish information too, this bonkers book is one to dip in and out of – unless that is, you are a total shark addict and then you might go for total immersion.

Or perhaps you’d rather make your own way through using the different options signposted on almost all the spreads. Trying to do that left this reviewer’s brain starting to feel like not-properly-set jelly.

Another consideration is one of how to classify the book: is it non-fiction or fiction. It’s really hard to decide and anyway, does it really matter? It’s hilarious either way and cleverly interactive to boot.

Moreover it includes pretty much everything you would ever need to know about sharks and a whole lot more you definitely wouldn’t;

but you may well end up so befuddled that you’re unable to tell which is which.

Take for instance, that there are three main kinds of shark attack:  the hit and run variety (I can’t quite work out who or what might be doing any running however); the bump and bite type during which the decision is made about whether or not you become a shark’s dinner and thirdly, there’s the deadly sneak attack. 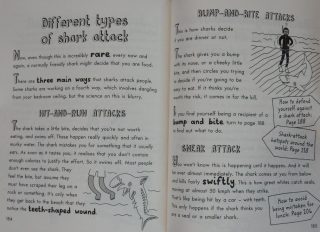 Of course no self-respecting shark book would omit what is frequently child readers’ favourite topic – poo; so James Campbell has obligingly included a poo spread. Thereon you’ll discover that shark poo is ejected ‘like a liquid bottom burp.

Moreover shark poo is an important part of the ecosystem. Really truly.

To finish, let me just say, this whole inventive compilation – liberally littered with Rob Jones drawings – is cartilageniously crazy and particularly perfect for selachimorphaphiles as well as bibliophobes who need their reads in easily digestible bite-sized chunks. 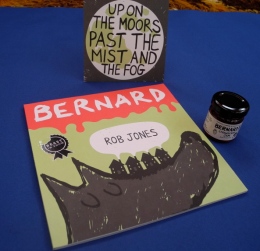 Bernard
Rob Jones
Beast in Show Books
What would you do if you heard of a large, red-eyed scary-looking dog whose teeth were huge and his paws the size of your head? Run a mile maybe: I’d definitely keep well away. That’s certainly the reaction wild hound Bernard receives from the local villagers who are convinced he has designs on one of them as his next meal. Not so however; all this sadly misunderstood canine is after is strawberry jam and lots of it. So, watch out for any you might have.

The rhyming text and wacky illustrations are really part and parcel of an integrated, mock-scary whole, tasty, treat. Just the thing to share on a chilly wintry day, this is a small book but one that makes a big impression. A debut for author/illustrator, Rob Jones, and for Beast in Show Books, I look forward to what they have to offer in the future. 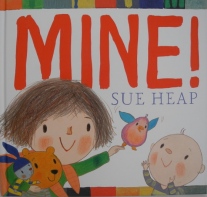 Mine!
Sue Heap
Walker Books
This utterly charming book about possessiveness and sharing centres on a small girl, Amy who likes to keep her treasured possessions – her blankie, her bear, her bunny and her bird very close to her. So, when the twins want to join her play she immediately tries to assert her ownership of her favourite things. To no avail though; Zak and Jack are equally determined. Then along comes Baby Joe clutching the toy bird. Amy takes possession.

Her cries of “MINE” result in a very sad looking Joe but it takes some wise words from the twins to trigger a minor crisis of conscience on Amy’s behalf and soon peace and harmony reigns – well harmony anyway, Amy fashion.

I love the way Amy manages to come up with a compromise solution that suits all parties while still giving her the upper hand and the way the emotions of the children are beautifully portrayed and mirrored in the expressions on the faces of bird, bear and bunny.
A must have for all early years setting and families with very young children.
Buy from Amazon

The Crocodile Under the Bed
Judith Kerr
Harper Collins Children’s Books
Young Matty desperately wants to go to the party but he’s poorly. Very disappointed, he’s left in Grandpa’s care with a party blower and the promise of some birthday cake. Suddenly he hears a voice but it isn’t Grandpa’s. No, it belongs to an enormous crocodile that emerges from under his bed offering to remedy the situation. So, with a toot from Matty’s party blower they take off to a very special destination – the King’s birthday party no less. This King isn’t the human kind though, he’s a handsome lion;

and with Chimpy on hand to look after him, Matty is ready to try some of the rides on offer. There’s a ‘rip-roaring’ tiger ride, a bouncy chimp ride and an enormous slide 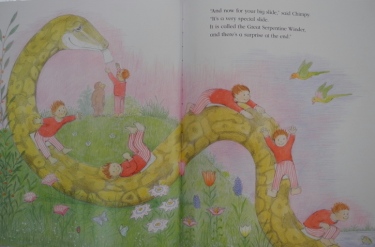 with a surprise at the end. After all the excitement, there’s crocodile waiting to fly him home just in time before the rest of the family returns.

Their party, he learns had been a washout but they have brought him some cake albeit rather soggy. “… you really didn’t miss anything,” dad tells Matty …
An enchanting story from the wonderful Judith Kerr who originally started this tale as a follow-up to her classic The Tiger Who Came to Tea – a superb stimulus for children’s imaginations: so too is this one.