The World’s Most Pointless Animals: Or Are They?
Philip Bunting
Happy Yak

Author/illustrator Philip Bunting presents an irreverent look at some of the world’s most weird and wonderful creatures that we’re fortunate (or sometimes less so) to share our planet with. Take leeches for instance: I don’t consider myself particularly fortunate to have to live with those (despite their use by doctors) but like all the other animals from axolotls to zooplankton included herein, these hugely successful sucking parasites have undergone adaptations that have enabled them to survive, indeed to thrive. And as the author says in his introduction ‘Each creature is an illustration of Darwinian evolution, and, every animal has a unique yet important role to play on our precious planet. I was amazed to read that a leech has 32 brains. But what does it use them for?

Let’s get right up close to some of the others then starting with the capuchin monkey (Cebus imitator renamed here ‘Peepee stinkipawas). These particular primates – the most intelligent of all known New World simian species –
use simple tools to procure foods they want to sink their teeth into. You certainly wouldn’t want to share their seeds or insects though, for the males make a habit of peeing on their hands and washing their feet in their urine. Yuck!

Seemingly the only raison d’être for Daddy longlegs (other than to scare some people silly) is to act as a ‘valuable source of food for birds on every continent, except Antarctica. WIth more than 15,000 species of these spindly-legged insects, that amounts to a vast number of satisfied birds.

Turning to ocean dwellers, jellyfish are hugely successful medusozoa, sorry ‘wibblious wobblious ouchii’ that are about 95% water. Apparently of the possible 300,000 species estimated by scientists, so far only 2,000 have been found including moon jellyfish that can clone themselves, and immortal jelly fish. The latter can reverse its life cycle reabsorbing its tentacles becoming a blob-like cyst again which then begins over … Awesome!

Bursting with facts presented in a manner that’s huge fun and highly accessible including quirky labelled illustrations – Bunting clearly enjoyed creating these, not least inventing daft new names for every creature included – this book has a more serious mission too; To celebrate the diversity of the animal kingdom and to remind us of the fragility of the ecosystems that together make up Planet Earth.

Give a child this book to get immersed in and you could put them on the path to becoming a zoologist. I’m off to see how many Lumbricus terrestris (aka Squiggleous wriggleous) I can spot brought up after the recent rain shower – I might even be able to make a clew – that, I learned from the spread featuring same, is the collective name for a group of earthworms.

Ever heard of a mopoke? I certainly hadn’t until this book arrived and even then I thought at first it was a made up word. Then I discovered a note at the back telling readers that a ‘Mopoke’ is the Australian nickname for the Southern Boobook, their smallest and most common owl species.
The particular mopoke of the title is the star of Philip Bunting’s debut picture book, which unsurprisingly begins ‘This is a mopoke.’
What follows is a deliciously playful sequence in which the mopoke, sitting on its branch longing for some solitude, becomes a highpoke, a lowpoke, a poshpoke and a poorpoke. 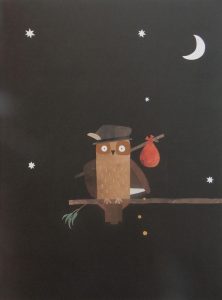 One then becomes two and then, more pokes, and a wee poke. Thereafter the real fun starts with a ‘Fee-fi-fo-poke’.

Before long the creature has become a ‘yo-poke’ – twice thanks to the addition of an exclamation mark.
Other animals also put in an appearance – there’s a wombat, totally unexpected, a snail riding a tortoise …

and a crow(poke) until finally the long suffering creature has had enough and flies off, presumably in search of a peaceful spot, leaving an empty branch.
Gently humorous, with a deceptively simple text and delightfully droll illustrations, this extended wordplay joke is great fun to share; and perfect for beginning readers of all ages.