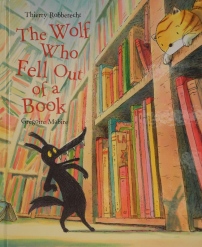 The Wolf Who Fell Out of a Book
Thierry Robberecht and Grégoire Mabire
Ragged Bears Publishing
An overcrowded bookshelf in Zoe’s room precipitates an adventure for the black wolf that spills out of a falling book as it hits the floor. With his pointy teeth, said wolf, in his own environment is a scary creature but once out of the book he becomes something else altogether – a frightened creature anxious to escape from the resident moggy. In some desperate attempts to keep himself out of the cat’s clutches he gets into all manner of testing situations 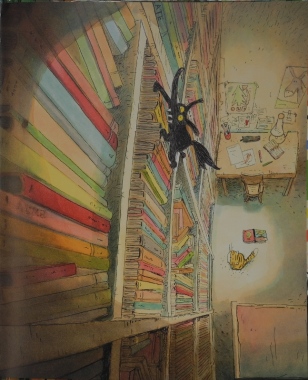 and tries to escape into other story books. None of the first few he tries can furnish a safe hiding place 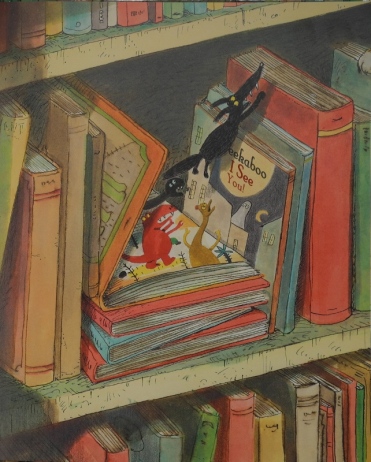 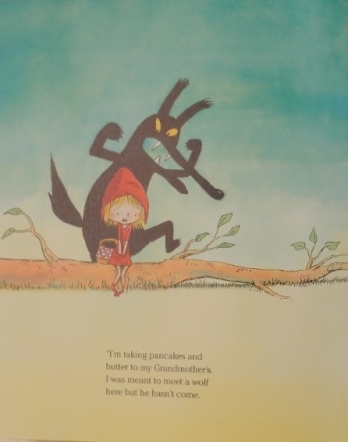 This little character is much more welcoming: in fact it turns out the wolf is just what she needs by way of a shoulder to cry on and of course, he’s more than happy to offer a helping paw to ensure a safe passage through the forest to Grandmother’s house.
Superbly subversive and with its sprinkling of fairy tale references and such a beguiling main character this is enormous fun to read with under 7s and a great book to spark off children’s own wolf adventures. Grégoire Mabire’s comic rendering of that toothy wolf and his larger than life feline adversary are both hilarious and wonderfully dramatic. 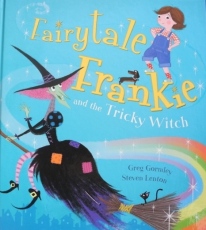 Fairytale Frankie and the Tricky Witch
Greg Gormley and Steven Lenton
Orchard Books
I like a book with a twist to the tale: with its plethora of fairytale characters and diverting illustrations this playful modern story certainly has one or two.
Frankie is a fairytale fanatic and one morning as she’s enjoying a peaceful read in her bedroom, a princess bursts in asking for a hiding place and thus begins a visitation from a whole chain of unlikely intruders large 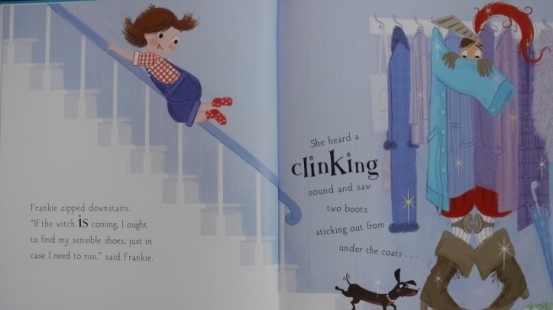 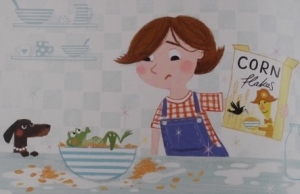 all asking for somewhere to hide from the witch.
When Frankie realizes she too should take cover, the witch bursts in demanding to know where the other characters are. Frankie doesn’t let on so the witch has to resort to more drastic measures to discover their whereabouts before uttering some words that finally cause the confused Frankie to understand what is going on. 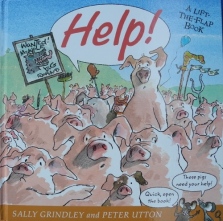 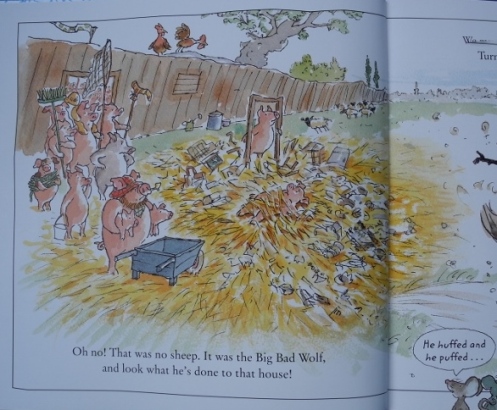 So it’s on with the search and the poster pinning … 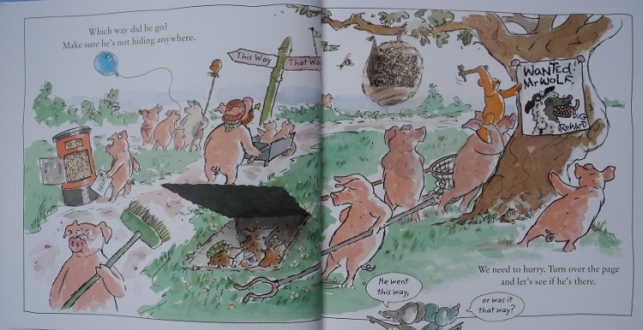 … until they discover more evidence of tricky doings.
But the creature’s still at large and the search continues till the seekers come upon a sturdy-looking house that might just be THE place.
Engaging, entertaining and from the opening lines, totally involving. There’s even a pair of mouse observers/commentators to add to the fun. 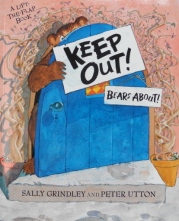 Keep Out!
Sally Grindley and Peter Utton
Hodder Chidren’s Books pbk
‘KEEP OUT! ‘and ‘BEARS ABOUT!’ caution the signs on the cover and title page of this book by the duo who gave us SHHH! This brilliantly interactive lift-the-flap sequel is equally all involving.
Despite the trepidation of the narrator who is constantly urging would-be adventurers not to proceed, we cannot help but disobey all the warning signs and continue the journey through the book, deeper into the woods. Woods where creatures lurk behind stones and logs, in ponds, under bridges 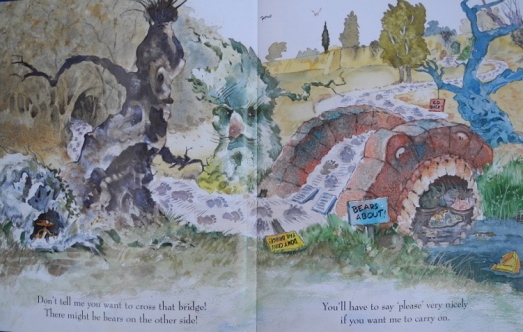 and in trees. Then there’s a door in the wall – definitely not to be passed through; who knows what could be waiting beyond. But through we go of course: what are all those bees doing buzzing everywhere and why the hives? We know which animals like what they provide.
KEEP OUT! says the doormat outside the cottage and BEWARE OF THE BROCCOLI! warns the notice in the garden – watch out veggiephobes! In we go however and knowing readers will quickly realize they are following in the footsteps of Goldilocks – that’s if they haven’t already. But the bears are very much in residence so there’s only one possible escape … 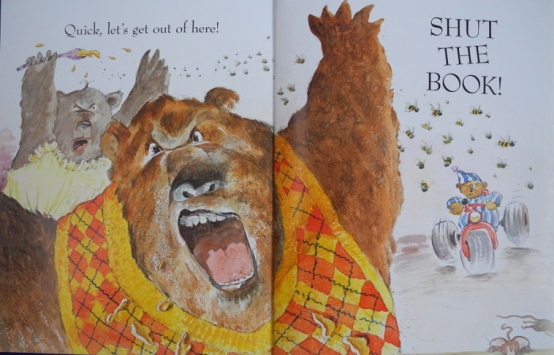 There is so much to explore in every new scene (some are wonderfully mock-scary) that one reading just won’t be enough. One five year old I shared it with commented, “It’s my favourite book ever.” 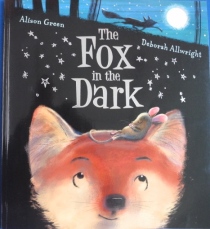 The Fox in the Dark
Alison Green and Deborah Allwright
Alison Green Books pbk
PHEW! A terrified rabbit dashes home in the nick of time, safe from the “fox in the dark.” Before long though there’s a Rat-a-tat-tat! on his door: surely it can’t be that fox, can it? No, it’s Duck followed shortly by Mouse, then Lamb 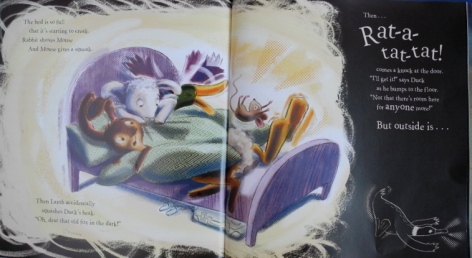 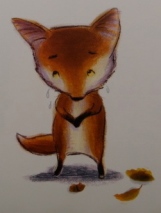 but what’s that shadow looming? … another knock …the tension mounts …
This is definitely one to keep young audiences on the edge of their ‘seats’ as the beautifully rhythmic, rhyming text gallops along at a pace to that final satisfying climax. 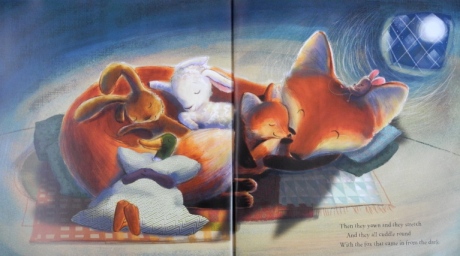 Deborah Allwright uses contrasting dark and light to maximum effect – in the moonlit, shadowy outdoor woodland scenes and those inside Rabbit’s burrow, some of which are illuminated by lantern, 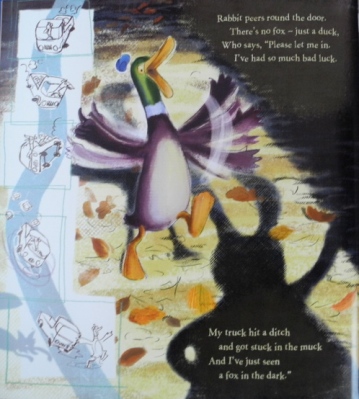 others by the moon shining in, and also in the animal silhouettes and ghost-like outlines against the black. Every turn of the page brings a visual treat.

Use your local bookshop: 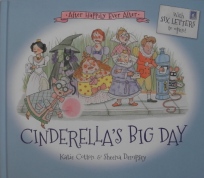 Cinderella’s Big Day
Katie Cotton and Sheena Dempsey
Templar Publishing
It’s just one week before the wedding of Prince Charlie and Cinderella when a letter arrives on the royal breakfast table addressed to the King and Queen: a letter from Charlie, informing Their Most Marvellous Majesties that the ring he’s due to place on Cinderella’s finger has gone missing. Immediately the King’s suspicion falls on the ugly sisters. But is he right? There follow five further letters through which much of the narrative detail unfolds. The wedding does take place though with some notable absentees and all is made clear why through the final communication fired off by Cinders herself as she relaxes happily on her honeymoon – that and …

Billed as ‘After Happily Ever After” I suspect this amusing novelty book is the first of a new series. Sheena Dempsey has used a palette of soft colours to create her scenes. Scenes that contain a mixture of contemporary items such as Cinderella’s heart shaped sunglasses, wry details like the mouse’s tail extending round the skin lotion bottle, 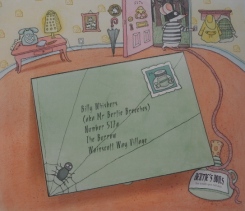 as well as the more traditional fairytale paraphernalia. Children will particularly love the wedding fold-out scene that is crammed with characters from traditional tales and nursery rhymes. 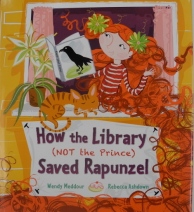 How the Library (Not the Prince) Saved Rapunzel
Wendy Meddour and Rebecca Ashdown
Frances Lincoln Children’s Books
On the top floor of an inner city tower block Rapunzel languishes, ignoring callers: the milkman, the postman bearing a letter, the baker woman, Rapunzel’s aunt with dinner, even a prince bearing chocs and red roses. 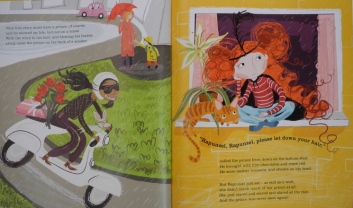 All exhort, “Rapunzel, Rapunzel, please let down your hair.” But, receiving no response, and with the lift out of order, one by one they continue on their way. Later though, concerned on account of her lack of food, they have a change of heart and after a discussion, all (except the prince who is never seen again) decide to return to make amends. Back they go and up, up to the sixteenth floor where a hearty meal is cooked for Rapunzel and the letter duly delivered. The food restores colour to her cheeks but it’s the contents of the letter that really puts a smile on her face.
‘Rapunzel leapt up and she shouted with glee:
“I’ve got a new job at the library!” ‘
From then on our heroine is transformed: no longer does she sit idly waiting to be wooed; she spends her time enthusing about books at work and educating herself when she gets home – courtesy of LIBRARY BOOKS – what else?
Told through a longish, zingy, rhyming text and bold illustrations that are full of funny details and mischievous touches such as the crow tugging at a tress of Rapunzel’s wayward auburn hair, not to mention cats, dogs and birds galore.
A great plug for libraries and the delights of books and a great picture book debut for illustrator, Rebecca Ashdown.

Also told in jaunty rhyme is: 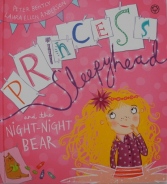 Princess Sleepyhead and the Night-Night Bear
Peter Bently and Laura Ellen Anderson
Orchard Books
Night has fallen over the kingdom; in the castle all are slumbering, all that is except one: Princess Sleephead is wide awake. But kindly Owl at her window is determined to help so off he flies, returning soon with Fox and Mouse. Their sleep-inducing ideas are great fun but very energetic and only serve to wake her further. Owl however has promised three friends so who is missing? Ah! It’s Bartholomew Brownfur-Brown – a large friendly creature – aka the Sleepytime Ted clutching a collection of bedtime fairy tales: 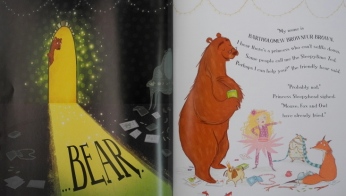 just the thing to cure the princess’s insomnia.
Exuberant illustrations littered with the princess’s ephemera, endearing animal characters and some enchanting sleepy-time scenes and a text that is a pleasure to read aloud, are the main ingredients of this fairy tale romp. 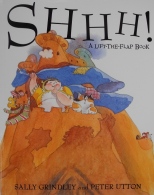 SHHH!
Sally Grindley and Peter Utton
Hodder Children’s Books pbk
It’s great to see this book reissued; my original hardback copy was read to destruction. Loosely based on Jack and the Beanstalk, the manner in which this book draws readers in is just superb. With the entreaty to “Come inside” we enter the giant’s castle wherein we view and creep past, a huge-bellied sleeping mouse, a slumbering cat – enormous, a broody hen, the giant’s wife busy cooking dinner and then, the snoring giant.
Distorted perspectives, grisly domestic details such as an axe to slice the bread and eyeballs in the stew pot, retrospective flaps so readers can check whether those they crept past have been disturbed – reassuring until the final one, after which it’s a case of doing what we are told … 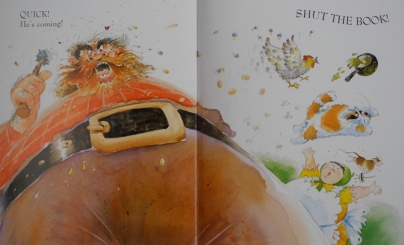 Not for long though, I can guarantee there will be cries of “read it again” straightaway.