Since his retirement, due in no small part to a serious knee injury in an Australian Rules football game, Alex Rance has written another story in his series of children’s picture books.

This one, Monkey’s Tale, as the author says, is the story of how he got through the traumatic season of his injury in 2019.

It tells of Howler Monkey, one of the jungle’s very best climbers until one day while out with his pals, the branch on which he was climbing snaps sending him flying out of the tree to crash with an enormous thump right on his tail. YEOCH!

How that tail hurts and scares Howler Monkey but instead of letting on to his friends, he clowns around trying to make them laugh. 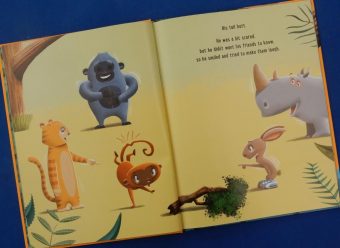 He may have fooled them but the Howler Monkey can’t fool himself and unable to climb he sits around thinking and becoming increasingly sad.

Then one day the very wise Oldest Monkey sits down beside Howler and asks what’s troubling him. Who better to confide in than Oldest Monkey so, full of self-doubt Howler Monkey reveals his secret worry: am I still a monkey if I can no longer climb?

A discussion ensues with Oldest Monkey asking some key questions that help Howler Monkey realise that no matter what, he can still make his friends laugh; he can still help them; 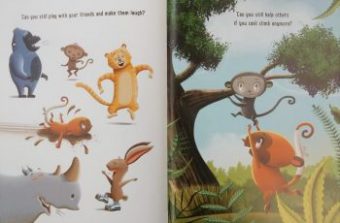 he still has a loving family and he can still make them proud – just in a different way. In other words, his actions do not define who he is and motivation for those actions is a key factor. Is this enough for Howler Monkey to regain his confidence and self-respect?

Resilience is key in Alex Rance’s story, illustrated digitally by Shane McG and as Oldest Monkey concludes ‘keep on being the best (monkey) you can be.’ Sage advice indeed.