Located off the coast of Australia, the Great Barrier Reef, the subject of this large format book, truly is one the world’s natural wonders. We read first about how the reef was formed and are introduced to the different types of coral, their structures, and how corals can multiply and spread. In order to discover the reef close up though, it’s necessary to be a qualified diver and scientists now have sophisticated equipment allowing them to spend longer and to go down deeper than ever, as is explained in one of the early spreads.

The second of its five sections is entitled Reef Dwellers and therein readers are introduced to the inhabitants both fauna and flora – of the reef and its environs.

It’s truly amazing just how many fascinating species live on and around the reef from small molluscs to mammals such as whales, some of them in symbiotic partnerships; one tiny reef island, Michaelmas Cay is home to thousands of birds. I was surprised to discover that night is often the most active time on the reef when a wonderful array of nocturnal creatures are hunting.

It’s not only the reef ’s natural history we learn of though. There’s also information about the culture and traditions of the Aborigines and Torres Straight islands.

Unfortunately however the reef is under threat, due largely to climate change as a result of the burning of fossil fuels : an increase in ocean temperatures and acidification endanger its very survival and that of the marine life that depends on it. The book ends with a look at what has already happened and what can be done to save the reef.

Throughout, the author, marine biologist Dr Helen Scales shares her knowledge and enthusiasm writing in an accessible style that will enthral primary age readers. Arresting illustrations by Lisk Feng showcase the awesome array of life of this remarkable World Heritage Site, while the entire design of the book is of the exemplary quality one associates with Flying Eye publications. 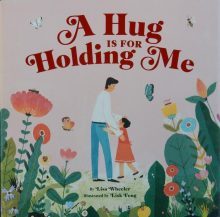 As a father and child stroll together, the former invites the little girl to become a nature observer. ’Look around and you will see / all the things a hug can be.’

The adult likens what they see to aspects of the natural springtime world and the child then responds. They notice a nest of speckled eggs, cocoons:
‘Cocoons are strong / yet gentle hugs, / and then, / surprisingly … // the air is filled with wondrous wings! / Your hug amazes me.’

during their meander that is lyrically described by Lisa Wheeler and illustrated by Lisa Feng in attractive stylised spreads of the two humans enjoying one another’s company among the flora and fauna.

Embrace nature, embrace one another, that is the essence of this book to share between parent and child.

In complete contrast is the outing shared by parent and infant in this story where engagement between adult and child appears non-existent :

This ironic tale of a mother totally absorbed in a conversation on her mobile while in the park with her toddler is something of a departure for the amazing Judith Kerr.

It certainly isn’t the gentle mummy time story one might anticipate from the cover picture and opening page – far from it.

Almost the entire verbal narrative takes the form of mum’s mobile conversation with a friend as she leaves the house for the park with her little boy for some ‘mummy time’.

Ensconced on a bench, she chats away about a recent party, the people who were there, the food, the changing fortunes for the better of her hosts and the ill-fortune that seems to dog her own life.

Meanwhile, as the pictures show, the toddler is engaged in a real life encounter with a large dog, 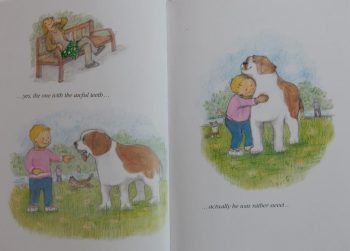 a spot of pigeon and duck food sampling, an unplanned dip in the pond, a ride on a swan, a treetop tumble,

a close encounter with a minibeast and a comforting cuddle from that dog again.

Strangely these parallel worlds of mum and toddler collide for mum’s conversation becomes a commentary on the pictorial action so beautifully portrayed by Judith Kerr.

An altogether intriguing book and a side-swipe at the human obsession with mobile phones. ‘Mummy Time’ seems to be just that, not time for mummy and toddler together.