Here’s a beautifully illustrated, narrative information book that cleverly combines two life cycles, that of a runner bean and an unnamed butterfly. (I’m not aware of a butterfly whose food plant is the runner bean.)

Written by conservation biologist and author, Martin Jenkins it’s the latest in the Science Storybook series for young children with growth and change as its themes.

Starting with a wrinkly bean seed ‘neath the ground, readers can follow its development as first a tiny root emerges, followed by (above ground) green leaves, then more green leaves onto one of which a white dot of an egg appears.

shedding three skins, almost stripping the plant of its foliage.

Fortunately though, the plant too continues growing apace, but of the caterpillar there is no sign. Instead, dangling on a thread is a chrysalis.

Meanwhile bean pods have replaced the flowers and are swelling ready to shed new bean seeds after which, come winter the plant dies.

Not so the chrysalis however, that is awaiting spring when …

Simply and effectively told in a reader-friendly chatty style, alongside growing your own beans and caterpillars this is an excellent introductory book.

Olive Owl
Barry Tranter and Emma Tranter
Nosy Crow
There’s something about owls in stories that endears them to very young children: most notably the classic, Owl Babies, and now here is an information picture book likely to win those far from cute creatures more friends.
Based on the Rounds apps this is one of a new series for the very young. Having read on the publisher’s press release that Olive’s creators are ‘firm believers in education through play’ it sounded as though they’re kindred spirits. There’s certainly an element of playfulness about this book. Emma and Barry Tranter’s design backgrounds are also reflected in this charming book: the owl characters and some other objects– in keeping with the Rounds series title – are made up of circles or parts of same.
Olive is a barn owl and through a mix of a narrative running across the top of the page, and factual snippets printed within circles scattered throughout each spread, readers and listeners can find out about her life cycle …

diet, shape and size as well as her mating habits and other characteristics. Young children will be interested particularly to learn that a barn owl’s wing span is wider that a 5 year old’s armspan.

There are also occasional speech bubbles that help make Olive something of a character.

All in all, a thoroughly enjoyable way to introduce an important aspect of the natural world to very young children; one to add to the early years’ book collection I’d say.
In the same series and also worth having is:
Parker Penguin
Hailing from the Antarctica, Parker is a rotund young penguin, but although he’s a bird, he cannot fly and still won’t be able to by the time he reaches adulthood after three years, which happens towards the end of the book. Instead he moves by sliding, waddling, swimming –

and ‘marching’. Marching is what he does, along with lots of other penguins, to the breeding ground and it’s there he finds a mate and after around seventy days out hatches a new chick, a male, Percy and …

the cycle begins again.
A different kind of cycle is explained in:

Hello, Mr Moon
Lorna Gutierrez and Laura Watkins
QED
The moon is the unlikely narrator of this rhyming story that takes the form of a response to a child’s observation, “Hello, Mr Moon … You’re up. You’re down. / Why so skinny/ and then so round?” Mr Moon then goes on to explain and is joined by a host of (mainly) nocturnal animals – a bat, a fox,

a badger, a fish an owl and a cat, each of which interjects an observation or a question for him, until the whole lunar cycle from new moon to full moon has been described and shown in Laura Watkins’ powerfully atmospheric woodland scenes.

Young children will enjoy the narrative – verbal and visual , learn some basic astronomical facts and at the same time absorb terms such as ‘gibbous’ from the context.
The teacher part of me does not like didactic directions but I appreciate that many adults may well find the “Next Steps’ suggestions on the final page helpful. 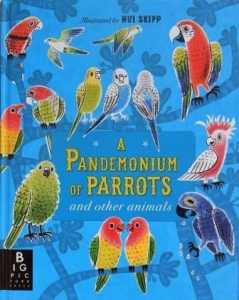 A Pandemonium of Parrots and other animals
illustrated by Hui Skipp
Big Picture Press
Essentially what we have here in this super book is a series of spreads featuring collective nouns for a dozen or so animals large and small, each one playfully and alluringly illustrated by a talent new to me, Hui Skipp; and embedded within each illustration is a descriptive quatrain (presumably written by Kate Baker), such as this:
With nimble legs and pinching claws,
they run across the forest floor.
Their gleaming armour shimmers bright,
while fragile wings prepare for flight.
… as well as questions to answer by exploring what’s depicted on the spread.

Representing the feathered ones are the parrots of the title, flamingos (a flamboyance), penguins in a huddle and these Hummingbird dazzlers …

There are tigers – an ambush, a Lounge of Lizards basking in the sunshine … 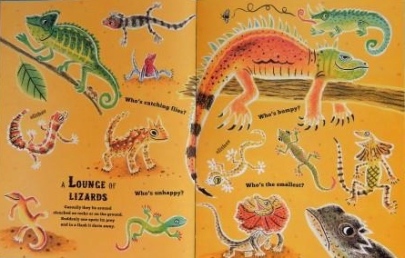 Casually they lie around
slouched on rocks or on the ground.
Suddenly one spots its prey
and in a flash it darts away.

and on the river banks ‘An Army’ of frogs – croaking, singing wonders every one. The mammals are represented by a Sloth of Bears, An Ambush of Tigers, A Troop of Monkeys, A Conspiracy of Lemurs …

and A Caravan of Camels – beauties all.
The final two spreads are a “Did You See?’ array of all the animals with questions, followed by a concluding Who’s Who that gives snippets of information about each animal included.
Altogether this book is a treat for the eyes, an opportunity to learn some collective nouns and a chance to discover a few facts about thirteen fascinating groups of creatures. One for the primary classroom or family bookshelf.

Because of an Acorn
Lola M.Schaefer, Adam Schaefer and Frann Preston-Gannon
Chronicle Books
This is a simple, but wonderfully effective look at a forest habitat and the interconnectedness of the flora and fauna that are a part of the ecosystem.
Because of an acorn, a tree grows; this in turn provides a nesting place for a bird, an insect-eating one that happens to aid seed dispersal.

The seed in turn grows, producing a flower that fruits, providing a chipmunk food. A snake with its beady eye upon the chipmunk …

is in turn seized in a hawk’s talons and when the hawk lands on the branch of, yes, an oak, down comes an ripe acorn and more until ultimately, there’s … 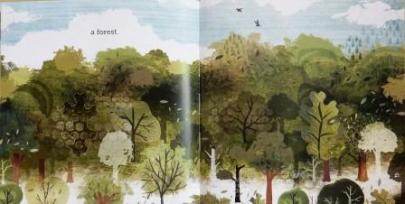 Circles and cycles of life are evident in this cleverly conceived, unassuming little book that packs a powerful punch.
In addition to being a super little book to share with a class or group of young children, the fact that the text is simple, patterned, and perfectly matched to the pictures on each page, beginning readers can try reading it for themselves and feel empowered having done so.
There’s so much to see and to discuss in Frann Preston-Gannon’s lush foresty illustrations. UK readers will find some of the animals less familiar and the oak species is different from the British ones but this could be a good talking point.