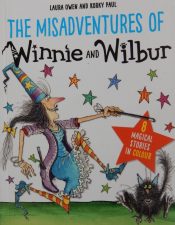 It’s good to have the ever-popular picture book duo, Winnie the Witch and her cat Wilbur, in another chapter book format edition.
This one has eight short stories, each one profusely illustrated by Korky Paul in his distinctive zany style.

In the first, Winnie gets her knickers in a bit of a twist when her new enterprise isn’t quite the resounding success she’d hoped, but then Winnie doesn’t exactly employ the kind of sales talk that will have her new products whizzing off the shelves. 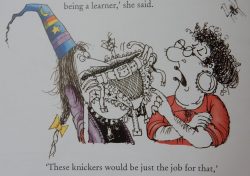 No matter: the ingenious uses she finds for her unwanted wares are bound to give readers a good giggle.

The second story has Winnie cooking up a feast for her interfering sister Wilma. It’s not the special fresh batburgers she originally planned – she hasn’t the heart to serve up relations of her ’diddly bat’ friend – but, thanks to some timely assistance from Wilbur, Wilma leaves after supper thoroughly satisfied with her meal.
That should suffice to give you a flavour of the hilarious escapades within; the others being concerned with bothersome bubbles, a whopping great whale and other fishy findings, a car boot sale with a difference, 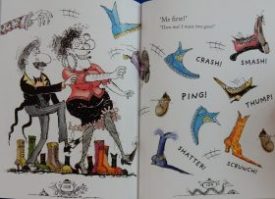 some high drama in a big top, extraordinary doings at a soccer game involving the odd bit of knicker elastic zapping and finally, a spot of excavating.
Sheer hilarity from beginning to end, and perfect read alone fare as well as a hoot to read aloud.

Get Me Out of Witch School!
Em Lynas, illustrated by Jamie Littler
Nosy Crow

In the second book of Daisy Wart’s adventures at Toadspit Towers, Witch School of Conformity and Strickness, the reluctant young witch is now known as Twinkle Toadspit.
She’s yet to gain full control of her witchy powers and still holds ambitions to be an actress. But when she determines to rescue a ‘cute, cuddly kitten’ Twinkle inadvertently sets off a chain of chaotic happenings.
It’s down to Twinkle and her pals to save Toadspit Towers. Can they do so, and in time for the would-be star of stage to tour her “Bottom”?

Bursting with wonderful characters, this is total spellbinding fun to keep readers in suspense throughout. Equally it makes a thoroughly enjoyable read aloud for those not quite ready to fly solo. However it’s read, Jamie Littler’s illustrations add to the enjoyment. 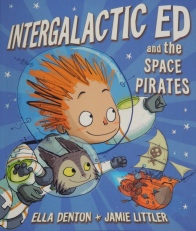 Intergalactic Ed and the Space Pirates
Ella Denton and Jamie Littler
Oxford University Press
Just behind Ed’s bedroom wall, safely hidden by a panel, lies his Intergalactic Operations Headquarters so when through his bedroom window, Ed notices the troubled-looking moon, it takes almost no time for him to alert his cat Sputnik , grab his Turbo Torch and backpack, don his spacesuit, step into the Space Transporter Capsule and zoom off into space. 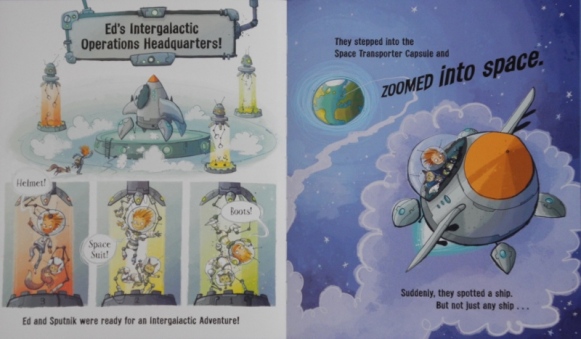 Before long, into view comes the largest spaceship in the galaxy –the Interplanetary Plunderer no less. And what’s that? A gang of pirates intent on a dastardly, almost unbelievable plan: to steal the moon itself. Can Ed, with his knowledge about the lunar landscape not to mention the relative size of the moon vis-à-vis Jupiter’s moon Ganymede foil the plot, especially in the face of threats from the ghostly galactic crew? … 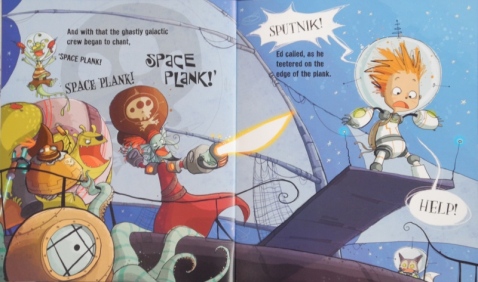 Let’s just say, that the marauding crew hadn’t quite reckoned on the guile of Ed’s faithful Sputnik and his beguiling feline footwork … 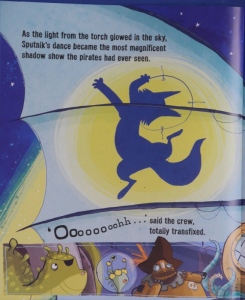 With Jamie Littler’s frenetic, cartoon style illustrations, this far-fetched frolic with its sprinkling of facts, will definitely appeal to those who like their action fast, furious and full of fun. 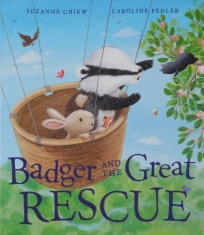 Badger and the Great Rescue
Suzanne Chiew and Caroline Pedler
Little Tiger Press
When Badger and his pals discover some bits and pieces lying abandoned in various places, they are quick to put them to good use: a washing line for Mouse, a new shed for Hedgehog and then there’s that large piece of red and yellow cloth. It would be ideal for a tent, a hammock and perhaps a kite – once the friends have shared it fairly that is.
Then all of a sudden, down swoops Bird with news of a little mole stranded in a tree … 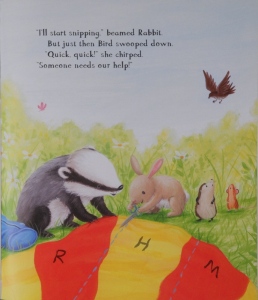 And that little mole knows just what the ‘trampoline’ offered for him to leap onto is a part of. Then it’s time for the friends to abandon their original creative plans and work together on operation repair and rescue. 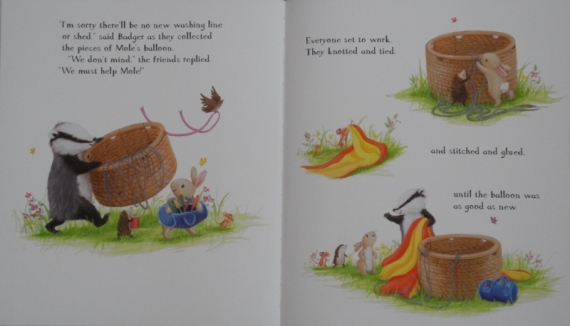 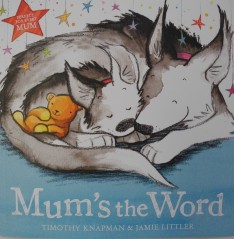 Mum’s the Word
Timothy Knapman and Jamie Littler
Hodder Children’s Books pbk
A very energetic, playful pup decides to discover the one word that feels like all the things he most enjoys – a cuddle, a splash in a puddle, a warm goodnight kiss, 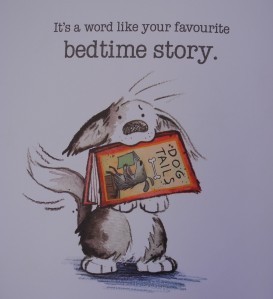 a favourite bedtime story, a tasty knickerbocker glory, the warm bright sun, a firework that lights up the night; all this and more. What could that word possibly be? “Mum,!” of course.
A rhyming text delivered through the small canine narrator, gorgeous watercolour and ink illustrations with nice touches of visual word play and a thoroughly endearing character (even to one who is not a dog lover).
Perfect for playful preschoolers to give to Mums on Mother’s Day and to share whatever the day.
Buy from Amazon 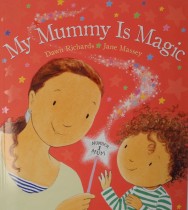 My Mummy is Magic
Dawn Richards and Jane Massey
Picture Corgi pbk
A very cute-looking toddler takes us through the day telling of all the magical mother and child shared moments, seemingly ordinary moments that make every day special when you have the world’s Number 1 Mum.
Jane Massey is a prolific illustrator who uses a wide variety of techniques and styles. All mums have magical powers when they open a book and share it with their children. 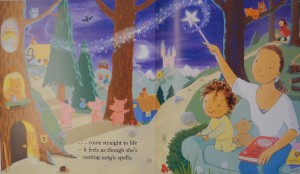 Such children will enjoy spotting the nursery characters when a swish of this storybook mummy’s magic wand brings to life the stories she shares.
For magical Mother’s Day moments and beyond.
Buy from Amazon 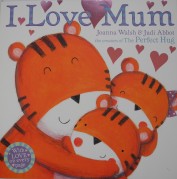 I Love Mum
Joanna Walsh and Judi Abbot
Simon and Schuster pbk
The small tigers in this story need no convincing that their mother is the world’s best Mum. She has the brightest, widest smile, is the best hugger and kisser better of hurt body parts and feelings and, she absolutely loves to play – at home, 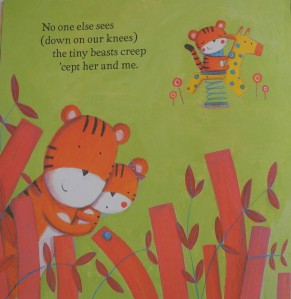 in the park and at bath time. All the best Mums are children at heart just like tiger Mum.
With lots of opportunities for toddler interactions and Judi Abbot’s delightful, lively, mixed media illustrations, this is another love-packed book from the co-creators of The Perfect Hug. 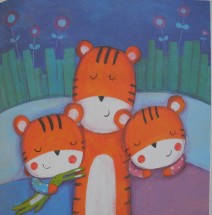 Buy from Amazon
Find and buy from your local bookseller:http://www.booksellers.org.uk/bookshopsearch