Ever fancied getting close up and chatty with some clawed creatures? Probably not but nevertheless, the creators of this book, author Andy and Nick (illustrator) would have readers believe that is just what they’ve done. Courtesy that is of a unique invention named a tranimalator that enabled Andy at least, to speak directly with ten creatures of the chelate kind. (Maybe Nick had his own ‘viewing from afar’ machine to facilitate creating his funky illustrations.)

Now, without further delay, let us too meet the interviewees, starting with a Bengal tiger hailing all the way from the wild grasslands and jungles of India.

The questions are tailor made for each animal, so our tiger is asked about her stripes, hunting, food preferences and catching thereof, offspring, her partner, her ideal day, dislikes, adversaries and rivals. Oh! And apparently, Def Leppard is her favourite band.

Other big cat interviews are with an extremely rare Snow Leopard; a (don’t call me spotted, call me rosetted) Jaguar from the Mexican wetlands, (3rd biggest in the cat ranking order); and the mighty African lion(ess).

There’s a yellow-eyed wolf that only howls to keep in touch with pack members or scare off other wolves. Apparently, such animals eat not only the flesh of their catches but also pretty much every other part too. Cheeky creature this one, talking of the online ordering habit of humans.

If you prefer bug-munchers then head straight to the Giant Anteater pages where you’ll discover how they extract their next meal – ants or termites – by licking up the tasty treats from their holes with their long, sticky-spit covered tongues. Interestingly anteaters lack teeth and have tiny mouths.

Or, why not try meeting the tough, fearless Honey Badger (though it will eat all manner of plant and animal fare) but it’s pretty small (think little dog size).

Don’t miss the chat with a Polar Bear, or the Giant Armadillo and the final, Three-toed Sloth either. The last one clearly has a sense of humour and will make readers laugh at his responses. Tee hee! 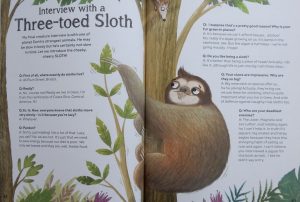 This is such a fun, hip way of presenting information – a considerable amount of it – in a memorable fashion that will appeal particularly to young humans that prefer a touch of light-heartedness to their learning.

The author of this book is passionate about getting children (and their teachers) enthusiastic about reading and a great one for making non-fiction fun. Here’s his latest and let’s say, enticingly titled offering  that as well as investigating their faecal matters, looks at animals’ footprints, homes, nests, skulls,

coprolites (fossilised dung to you and me), and more. And yes, it’s terrific fun.

Poo, so we’re told is a good indicator when it comes to clues regarding which animals you’re likely to come across on your foray into the wild; and generally speaking the larger the animal, the larger its poo. Hmm! A rhino for instance leaves deposits of between 50 and 90 cm whereas that of a wolf is only 12 to 15 cm and shrew poos are a minute 2-4mm.

For those interested in classifying things we’re given half a dozen different turd types – tubular, lumpy, pea-like, pancake, shiny blocks/clumps and twisted/hairy, deposited by various mammals to start us off.

Bird droppings, you’ll be interested to learn, are generally more tricky to identify than those of mammals and should you want to become a bird poo detective, illustrations of seven types of bird plops are provided.

Now who would have thought that an adult reviewer could become completely engrossed in a book that focuses on excretory matter? It was certainly so where this one is concerned: my next forest expedition will perhaps take on a completely different focus; and yes, I’ve read the rules of tracking provided at the front of the book along with the annotated list of things needed on an expedition.

I must mention the illustrations: bear in mind that Claire Almon whose watercolours grace the pages is from the USA; thus her blue robin’s egg is of the North American robin whereas the European robin lays creamy eggs with light reddish-brown markings.