Here’s a tale that happened long ago – or was it so long?

Told with an appropriately bouncy rhyming text by Helen Baugh (it does feature spherical objects after all) we discover what happens when the little Spots, paying insufficient heed to their parents oft repeated warning, “If you go over the hill you will be taken away by the dots”, 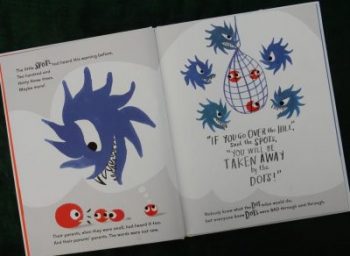 start getting more daring with their favourite game until Baby Spot, scared and still, finds itself one evening at the apex of the hill.

However, close by is a second small someone, equally on its own.

A conversation ensues, and a revelation, followed by something very exciting …

Flip the book and read the story from the perspective of the Dots. This small tribe are also pod dwellers and their little ones love bouncing too, receiving a similar warning about the ill-intentioned Spots.

Such a clever tale of colliding communities that celebrates difference and lays bare the idea that fear and prejudice are often fuelled by ignorance, showing that we’re all much more alike than we might at first think.

Helen tells it with a deliciously wry liveliness that is mirrored in Marion Deuchars’ superbly expressive scenes of small spheres and their adult carers.

Do make sure you study closely the grand meet up of the two infant groups wherein Marion has managed to give each of the playful infants a different look.

I can’t recommend this one enough: it’s brilliant.