It’s Only One!
Tracey Corderoy and Tony Neal
Little Tiger

This is a cautionary tale about what happens when people’s actions are thoughtless.

It’s set in Sunnyville, a fun, friendly and generally lovely place – until kind-hearted Mouse offers Rhino a toffee. Rhino tosses the wrapper away with the titular comment, but so do a host of other town residents, with one item landing hard on Tortoise’s head and leaving Giraffe outraged at the ever-growing rubbish heap. 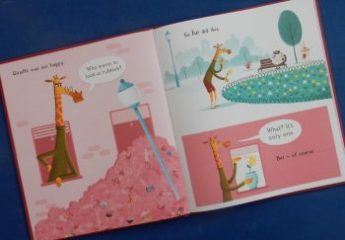 To cheer himself up Giraffe picks a flower from the park with the same “What” It’s only one’ comment ,which of course it wasn’t.

Now it’s Penguin’s turn to feel anger, so to cheer himself up at the loss of all the flowers he turns to music – only one song of course but … 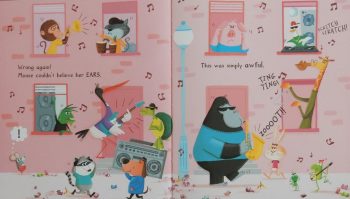 Can anyone or anything manage to curtail this catastrophic concatenation that’s caused the entire population of Sunnyville to become grumpy?

We all know only too well the terrible impact dropping rubbish has on the environment, wherever we live. And I’m sure we all want to be good neighbours – this is something that’s become all the more evident since the start of the pandemic – but it’s all too easy to slip into thoughtless actions such as tossing aside that odd car park ticket or receipt.

There are reminders from author, Tracey and illustrator, Tony at the end of their story, of the importance of considering how whatever we do might be impacting on others and their happiness. However, it’s the cast of characters (I love their zany portrayal in Tony’s expressive spreads) from this smashing and timely book that have the last word.

Share, ponder, discuss and most important, act upon this – it’s only one but think of its potential payoff.

One thought on “It’s Only One!”