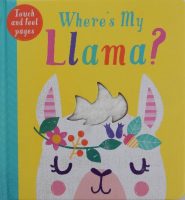 Capitalising on the current vogue for all things llama, Becky Davies has written a board book. Herein a llama has gone missing and it’s up to little ones to follow the trail of brightly coloured footprints to track her down.

Along the way tiny detectives will encounter a long-necked Giraffe, a cute tailed fox

and a long-eared rabbit, all of which have similar characteristics to the llama.
But where is the errant ungulate? Rest assured her fluffy tail will finally give the game away.

With its final flap reveal, Kate McLelland’s alluring scenes – each with a touch and feel animal body part – on softly patterned pastel backgrounds, simple descriptive text with the repeat refrain, ‘Where’s my llama?’ to chant, there’s plenty to keep the attention of tinies throughout this touch and feel, search and find book. 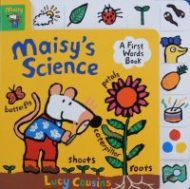 Out and about, she encounters some very windy weather that is perfect for kite flying; seasonal snow as she feeds the birds; enjoys a relaxing break from vegetable gathering to enjoy watching the minibeasts close by. Then it’s time for a bit of seed watering – perhaps she’s planted sunflower seeds – followed by observing some seasonal changes. 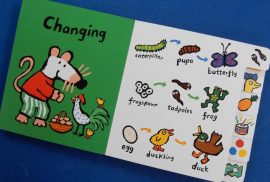 The arrival of her friends gives an opportunity to look at various parts of their bodies and hers and once she’s alone again, she and cuddly Panda can investigate a variety of textures; make some rather noisy musical sound with her percussion; don her painting apron and experiment with her paints, perhaps trying colour mixing and after all that activity it’s time to sit and read a book (or choose from one of the other learning tools shown on the opposite page).

This is a fun, rhyming tale of an energetic would-be little ninja whom we first meet looking terrified of the rather large family dog.

Creeping away, he comes upon his younger brother happily playing with a balloon. Not for long though. With a deft ‘chop’ Ninja  removes the balloon from little bro., then proceeds to snatch his chocolate-chip cookie and with a further chop – delivered with his foot this time – destroys his block-built castle leaving the long-suffering toddler howling.

A change of heart caused by an unseen force calling ‘Ninja, Ninja, would you stop?’ sees our Ninja then pause and help to reconstruct the building before whizzing off once more into the great outdoors.

It’s there that he receives his comeuppance, discovering – much to his surprise – that little brother is actually a highly observant pupil. Time to join forces it seems, for two Ninjas may well be better than one, certainly when it comes to scheming.

There’s a slight retro feel to Tad Carpenter’s bold, bright scenes from which the black-clad Ninja leaps out – literally! I can see little ones joining in, enthusiastically chanting along with adult readers aloud of debut author, Todd Tuell’s staccato text, as they turn the pages.