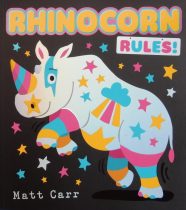 Matt Carr’s Ron is a rhinocerus after my own heart – a fun and art loving, rule subverter, full of ideas of the divergent kind.

Being grumpy, a loner and ready to charge should anything approach is not for him. Instead Ron is at heart a fun-loving, art and music enthusiast, brimming over with creativity and joy. Moreover he wants to share his joyful ideas with the other animals but none of the rule-abiding creatures is interested.

Life for Ron is pretty mundane until one sweltering afternoon at the waterhole he catches sight of his dull reflection in the water. Thinking that if only he could show himself as he really is then friendship would follow, an idea strikes him and Elmer the patchwork elephant style, Ron sets to work with his creativity …

Once he’s dried off he is transformed into a true life work of art and as you might expect, he now feels A-MA-ZING!

Time to get himself noticed and so he does: first he impresses the meerkats and before long lots of animals are eager to have fun and be friends with the transformed Ron. Happiness at last.

Happiness however is not what his fellow rhinos feel; oh dear no. Ron is a total embarrassment, so they tell him.

Fortunately though, the meerkats stand up for their new friend and point out something that hadn’t occurred to the rhinos. Realisation dawns and then there’s only one thing to do … and Ron does it in one deft move of his forelimbs.

I wonder what new rules he created in place of old ones. What three would you have chosen?

Through his droll illustrations and heartfelt words Matt has created a thoroughly inspiriting story. The message is loud and clear: be true to yourself, be proud of who you are; and if that means finding a way round, over or under the rules then so be it, and good on you.

Love the cleverly worded title and the final ‘Did you know?’ page.