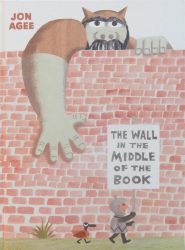 ‘Something there is that doesn’t love a wall’. So begins Robert Frost’s famous poem Mending Wall, and so it is too, with Jon Agee who has cleverly constructed a fable with a high brick wall running along the book’s gutter, with the action unfolding on either side.

The story opens with, on the verso, a small knight carrying a ladder approaching the wall while on the recto stand menacingly, a rhino and a tiger. ‘It’s a good thing. The wall protects this side of the book from the other side of the book’ the knight tells us as he stoops to pick up the displaced brick to mend said wall. On the other side, the crew of angry animals has increased. 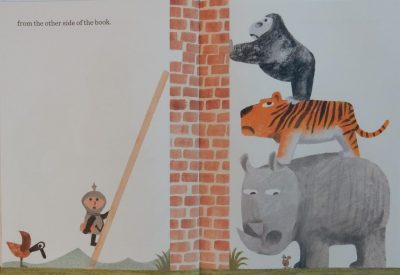 Up the ladder goes our knight oblivious to what is happening behind him and asserting, ‘This side of the book is safe. The other side is not.’

By this time, the bond with the author is firmly established and readers and listeners will be revelling in the superb interplay between words and pictures, asking themselves, are our narrator’s words altogether well- founded?

Next we learn of the most dangerous thing on the other side of the wall, an ogre. 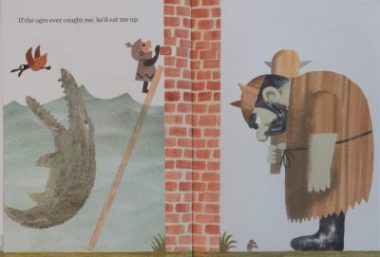 This ogre however is not quite what the little knight is expecting. Indeed other things too are not at all as he’d anticipated. 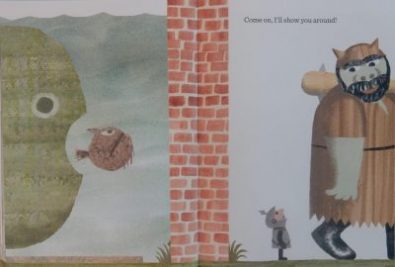 Brilliantly expressive – look how the faces and body language of all the animal characters speak without uttering a single word while much of the feelings of knight and ogre are conveyed wordlessly, serving to emphasise the verbal/visual antagonism.

Agee’s pacing too is superb, but best of all is his inherent theme that preconceptions about people from elsewhere are often wrong. In our troubled times of erecting boundaries, walls in particular, rather than building bridges, this timely book will strike a chord with many readers and is a fantastic starting point for opening up discussion.

One thought on “The Wall in the Middle of the Book”