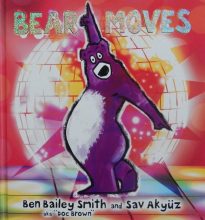 The purple ursine character from I Am Bear returns and, sporting his sweatbands, he’s in groovy mood.

With Bunny on DJ duty it’s time to show off those funky moves. First off it’s Furry Breaking – wow this guy certainly has attitude!

Next we have Running Bear, quickly followed by the Robot and there’s even a spot of limbo.

This he follows with a doughnut fuelled Belly Dance, 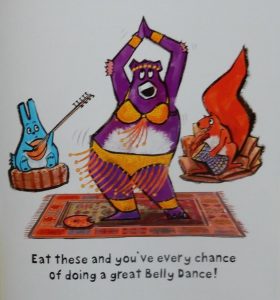 a quickstep – oh no that’s his pal squirrel attempting to beat a hasty retreat – and next, bums a-winding, everybody do the twist. 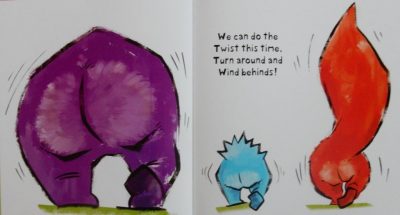 Even then, this dance enthusiast isn’t quite done but for his grand finale he requires an altogether sweeter partner …

You can really feel and hear the beat in rapper Ben Bailey Smith’s (aka Doc Brown) rhyming text, while Sav Akyūz shows the action both frenzied and smooth, in bold colours outlined in thick black lines

Great for child participation is this zany offering.