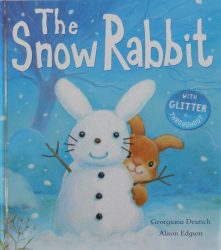 Bear is a grumpy creature; he avoids company, resents any intrusions onto his territory and has a growl like no other.

One day however, a jolly little rabbit decides that Bear needs cheering up and builds a snow rabbit close to Bear’s front door.
It doesn’t receive the response the little rabbit was hoping for. Bear’s furious roar shakes the trees resulting in one snow-sodden Bear and a squashed snow rabbit. 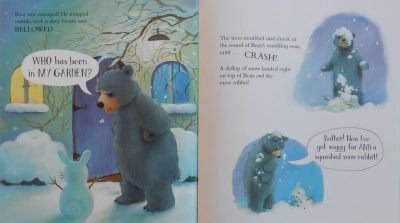 Next morning it’s an even grumpier Bear that resolves to discover who the builder was.
He questions his neighbours (love Alison Edgson’s animal expressions as they’re confronted) eventually learning that Rabbit is the culprit and rather surprisingly he demands that the little creature helps him fix the ‘massive mess’. 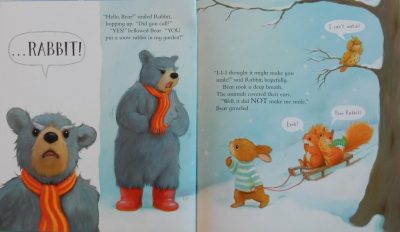 As the two do so, it appears that Bear might be about to shed his grumps …

Bring on that happy ending.

Little ones will relish the extreme grumpiness of Georgiana Deutsch’s Bear as portrayed by Alison Edgson and especially enjoy following the speech bubbles and changing expressions of the other characters as they watch the events unfolding between the two main players.