Fiercely independent, little wolfling Wilf considers himself big, strong and tough, so when it’s time for the wolves to find themselves a new cave, he’s eager to lead the way. “One day,” comes the response from the others.

Their journey through the snowy arctic tundra is a struggle for all members of the pack but despite his strong will, Wilf struggles to keep up finding the gap between himself and the adults growing ever larger until exhausted and out of breath, he loses his way in a blizzard. Too proud and indeed hoarse to howl for help he’s forced to spend the night alone beneath the stars.

Suddenly the ice beneath him shatters sending him cascading into the chill inky depths.

Rather than the end he fears, Wilf finds himself being rescued by a sea unicorn (narwhal) that takes him safely back to shore.
From there a host of other arctic animals, large and small, assist the little creature 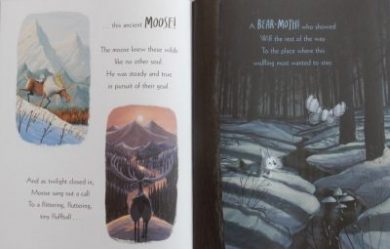 until finally he’s reunited with his pack.

Thankful to all his rescuers, Wilf makes them a promise, “If ever I meet one who’s strayed off their track, / I’ll help them along by guiding them back.”

Wilf’s journey, both emotional and physical is truly testing, indeed too much for the young wolf to cope with alone.

Rachel Bright’s narrative style, at times poetic and at times matter-of-fact, allows young humans to come to an understanding that there are times when asking for help is exactly the right thing to do; and that team work is as important as going it alone, often more so.

Jim Field’s illustrations rendered in hues of indigo, white, cream, purple, silver and brown have a luminosity that invokes a sense of awe and wonder, making the arctic tundra a truly beautiful mystical place imbued with its own natural magic. I absolutely love the way the essence of the animals is shown in the aurora borealis both when Wilf is lost and when he’s safe once more.

A beautiful book to share and to return to, over and over.