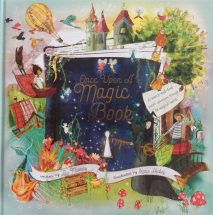 Entering out of the rain a toyshop that seems to have appeared from nowhere, best friends Sophie and Jack embark on an adventure that takes them, once they’ve located and turned the golden key, through the pages of a purple book.
Their journey takes them to all kinds of locations: a fairytale forest wherein a wicked witch might be lurking; a pirate island;

a city they reach on a flying carpet and a frozen mountainous region where the witch is at work on an avalanche-creating spell.
From there it’s on to a medieval castle where Sophie falls under that witch’s spell; then they dive beneath the sea to an underwater world.

The next magic door leads them to a jungle city from where they enter the land of sweets before stepping back in time to a cobbled city wherein the witch has let loose animals from a zoo.

At the fairground an old woman tempts Sophie with an apple and they spot a familiar-looking cottage. 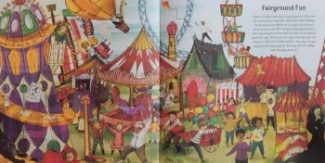 Surely they haven’t been tricked by that wicked witch after all that? They’d better hurry up and find, with readers’ help, all the vital ingredients that will enable them to escape her clutches.

Intricately detailed illustrations of the various locations from debut picture book artist Katie Hickey, together with a story that draws readers in from the very start and holds them spellbound through to the final spread with so many items to search for and clues to solve, it will be a considerable time before not only Jack and Sophie, but those accompanying them on their journey, finally emerge from its pages.