It must surely be a symptom of our troubled times that there’s been a spate of recent picture books on the theme of anxiety, and the mental health of young people is constantly under discussion, due in no small part to the prevalent pressurised education regime, a legacy of a certain politician currently championing the dreaded BREXIT.

The most recent of such books to come my way is The Worry Box wherein we meet the worrisome Murray Bear along with his big sister, Milly.

It’s waterfalls with their potential for ‘bigness’ and loudness that present the first of Murray’s worrying possibilities. Fortunately though, his fears in this respect are allayed by Milly as they make their way home.

Back inside Milly introduces her coping tool, a worry box, to her sibling, explaining how it works. They make one for Murray and they head off to meet their friends at that waterfall. 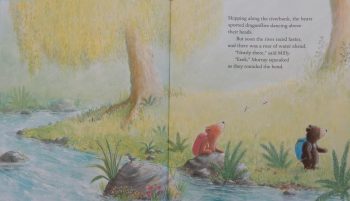 Once there Murray remembers to use his special box when he starts feeling worried about climbing a tall tree. 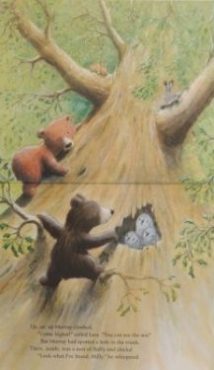 After a fun-filled afternoon, the mislaying of Milly’s backpack delays the friends and they’re not ready to leave until sunset. It’s then that Lara reveals her worries about the dark. Now it’s Murray’s turn to offer reassurance, a helping paw and co-use of his special box until they’re safely home,

after which the sibling bears stand in the moonlight contemplating their amazing day together.

Enormously reassuring for all little worriers is Suzanne Chiew’s story while Sean Julian’s gorgeous illustrations of the verdant natural landscape setting make you want to pause on the dragonfly littered riverbank, refreshing waterfall and scale the tree along with the animal characters so beautifully portrayed herein.

When I taught KS1 children we’d often have a worry tree (branches standing in a container) in the classroom. Children wrote their worries on leaf-shaped coloured paper, hung them from the twigs and then every day or so, those that wanted to shared what they’d written with the class. A discussion could arise or the mere act of hanging up the leaf often worked on its own. After sharing this book, children might create their own worry box for use at home or the class could make a communal one that is used in a similar way.

No matter what, a shared reading will help listeners let go of their concerns and enjoy embracing new challenges.