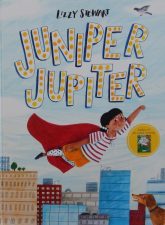 A super-hero girl: that’s got to be a cause for celebration from the outset despite the fact that for Juniper Jupiter ‘It’s no big deal.’ This cool character has super powers in abundance: kindness, bravery, speed and guile, strength and she’s super-smart. She can fly too.

All in all it’s a pretty satisfying life but there are times when she feels lonely, so she decides to advertise for ‘side-kick’ and she’s pretty definite where her requirements are concerned …

There are plenty of people wanting the job but it doesn’t take too long for Juniper to rule them all out. Just when despair is setting in and a super sized sulk about to descend upon her, the final applicant makes her presence felt and guess what; she fits the bill perfectly. 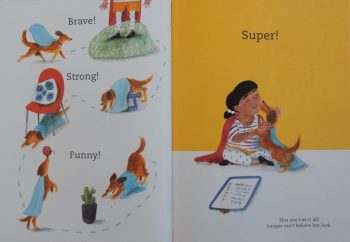 Hooray! Now, with Peanut beside her, our young heroine is doubly super but that as you might expect, is ‘no big deal’.

The chatty matter of fact telling leaves the illustrations to do much of the talking and once again they’re absolutely splendid – vibrant, detailed, and beautifully observed, the feeling bored sequence in particular …

If superheroes are your thing then you might also enjoy:
Molly Mischief Saves the World
Adam Hargreaves
Pavilion
This young female is perhaps every parent’s worst nightmare and when she dons her super hero gear and assumes superpowers, well it’s anybody’s guess what she might get up to.
Find out more in this new adventure wherein the feisty miss discovers that being a superhero isn’t really all it’s cracked up to be.