Lots
Nicola Davies and Emily Sutton
Walker Books
Subtitled ‘The Diversity of Life on Earth’ the enchanting large-sized book looks at biodiversity and interdependence on our planet.
The ‘LOTS’ herein encompasses over a hundred different animals as well as numerous plants and one enthusiastic little girl narrator.

By giving voice to the child, Nicola Davies cleverly explains what would otherwise be an abstruse topic in words that pre-school and KS1 age children can engage with and enjoy.
We visit a variety of locations from deserts to tropical islands; and zoom right in to such microbial habitats as beneath the feathers of birds, on the backs of lichen beetles 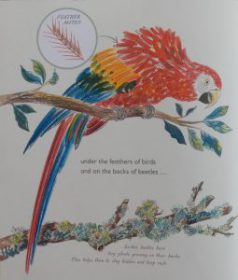 and even boiling volcanic pools. Counting all the different kinds of flora and fauna is far from easy on account of sheer numbers; but sometimes it’s a very difficult task due in part to the comparative inaccessibility of particular habitats – the tops of tall jungle trees or the bottom of the coldest seas for instance. But also there’s the fact that some young creatures – the Queen Angelfish – for one, look quite different from the adult; or alternatively things that look virtually identical are entirely different species such as here:

The Viceroy Butterfly and the Monarch look almost identical

All this is explained in a straightforward narrative that as well as providing youngsters with a wealth of information, is likely to engender awe and wonder in the ‘almost two million different kinds of living things’ already identified; and the millions that probably are yet to be found.
In the three final spreads, crucial ideas about extinction and the importance of preservation of living things are introduced, leaving readers much food for thought about the vital stewardship role humans have in the whole scheme of things.
This follow up to Tiny also has wonderful detailed, painterly illustrations by Emily Sutton. A must for primary school classroom collections and family bookshelves.

One thought on “Lots: the Diversity of Life on Earth”