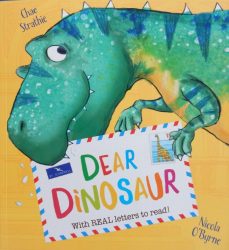 Dear Dinosaur
Chae Strathie and Nicola O’Byrne
Scholastic
Dinosaurs are an ever-popular theme in picture books but how to give it a new slant? Chae Strathie does it with letters.
After a visit to the museum, young Max writes to his favourite exhibit, the T.Rex and after a long wait, is super-excited to receive a reply – albeit a slightly alarming one … 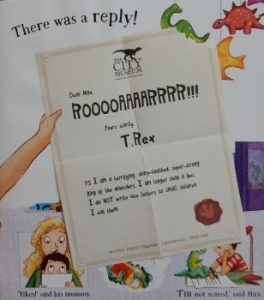 Thus begins an exchange of written communications between boy and dinosaur wherein each reveals a variety of facts and figures about himself. For instance six year old Max learns that his dino. pal is 65,999, 999 older than he is; and hears all about how his favourite T.Rex celebrated his birthday – playing football just like Max himself. Or maybe not exactly like: there wasn’t a vase-breaking mammoth at Max’s party.
In exchange, T.Rex learns a little about ballet dancing and sandcastle construction.

Summer holidays over, Max and his family return to the dinosaur museum where they discover that things aren’t quite as they were on their last visit …

Now why might that be? And what is his special friend doing with a rubber duck?
Certain to appeal to dinosaur fans, this funny epistolary tale has great potential for primary teachers wanting to encourage writing. Children could perhaps pair up and, with one acting as human and the other, dinosaur, send letters and other communications to each another.