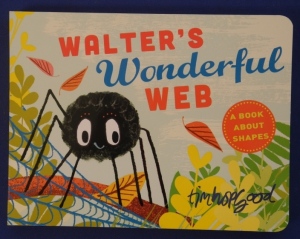 Walter’s Wonderful Web
Tim Hopgood
Macmillan Children’s Books
Walter is a spider with a mission: he wants to spin a perfect web, not a wibbly- wobbly one that is whisked away whenever the wind blows.
His first effort – a triangular one is destroyed by the first puff of wind so he tries another – a rectangle, but with no more success.

The diamond meets a similar fate but what about his circular-looking one, could that be the answer?
But three wooshes and Walter plus web hit the ground. Nearing despair, Walter stops to think before making one last attempt and by nightfall it looks as if he’s got it the design just right –

WOW! Walter, you certainly deserved to succeed – top marks for perseverance and a wonderfully intricate web.
This delightful story for the very youngest provides a great opportunity to introduce ideas about not giving up when things get tough and of course, built into the narrative are those six basic 2D shapes.

The Butterfly Garden
Laura Weston
Big Picture Press
Twenty words and a sequence of half a dozen super-stylish, beautifully patterned black and white illustrations: nothing much to get excited about – right? Wrong: look closely at the first of those black and white spreads. 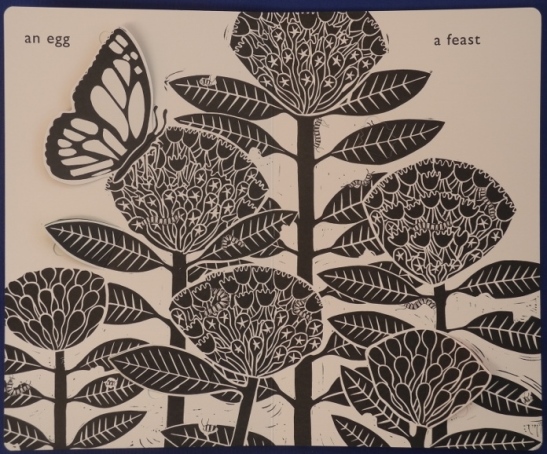 How many caterpillars can you spot? Look again at the silhouetted leaves and blooms and you notice there are flaps to lift. Open the top left-hand flap to reveal … 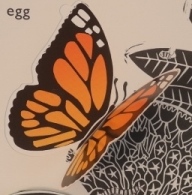 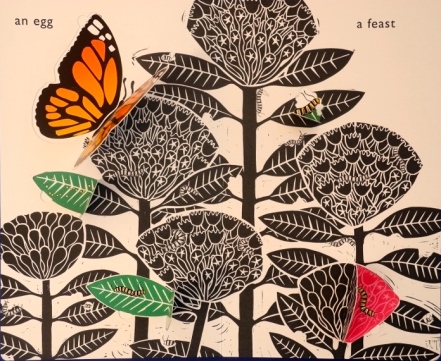 The subsequent spreads show the life cycle and life journey of the Monarch butterfly. (In North America, the Monarch migrates en masse to Mexico during the course of its life.)

Essentially that’s it and every spread is beautifully designed and arresting first in black and white and then with its flashes of flamboyant colour.
Although the Monarch isn’t a breeding British butterfly, this book is a striking visual account of a butterfly’s life cycle.

The Tiger Prowls
Seb Braun
Simon & Schuster
It’s hard to choose a favourite from the five animals that pop out from the pages of this seemingly simple yet impressive book. I love the shape and feel of the whole thing – its arresting cover, the way it whizzes through the various habitats the colour palette used and the clever paper engineering. Then there’s the elegant prose of the sentences used to describe each of the iconic creatures that grace the spreads.
First off is that tiger from the cover described thus:
‘The tiger prowls, stalking the jungle. Paw after heavy paw crunches on the forest floor. And so he does emerging from a gentle hint of vegetation straddling that first spread across which slides a muted snake.
Turn over and meet a graceful whale with its cleverly upturned tail and snout; 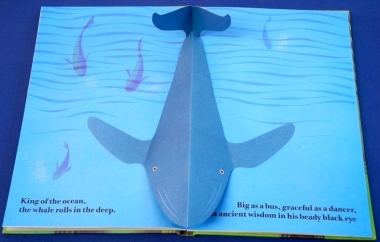 the brown bear padding slow through the forest, the mighty elephant taking a shower in the hot sun (If I’m fussy I’d like to have seen an upturned trunk and slightly sharper tusks here ) and finally …

Gentle, elegant, treetop nibbling, cloud-high grazer giraffe ‘pitching his way across the savannah, like a ship adrift on the open plain.’ (love those bird silhouettes)
Aimed at the very young but I can also envisage older children who get hold of this being inspired to try their hand at making their own pop-up animals.

Dinoblock
Christopher Franceschelli and Peskimo
Abrams & Chronicle
MEET THE DINOSAURS says the sign across the museum doors and on opening them readers (and the two child investigators) find two key questions ‘Who are the dinosaurs?’ and ‘Where are the dinosaurs?’
From then on the book’s clever design really comes into play with a formula that is used to great effect for the next ninety or so pages using a mix of cleverly crafted cutaway pages and a series of similes likening each of the twenty three dinosaurs introduced to something a young child is likely to be familiar with, followed by another spread showing the particular dinosaur in its natural habitat and a sentence giving the dinosaur’s name with its phonetic pronunciation. Thus we have for instance, ‘I have a neck like a goose …’ 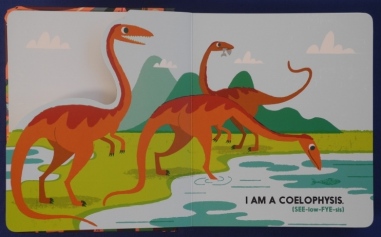 turn over to ‘I am a Coelophysis (SEE-low-FYE-sis)’…
Or this one: 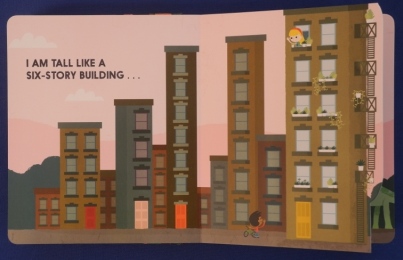 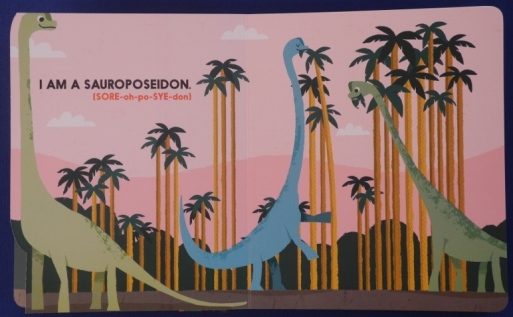 The grand finale comprises a spread of drawn-to-scale dinosaurs on a gate-fold that opens out into a farewell display of skeletons of all the dinosaurs featured.

Of those a fair number are relatively uncommon in books for young children and indeed a few such as Micropachycephalosaurus and Edmontosaurus) were new names to me.
Assuredly a block-buster for the very young but also a book that offers a great opportunity for them to see and think about a favourite topic in an exciting and imaginative new way. And, a jumping off point for further investigation and children’s own creativity.