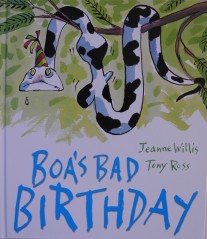 Boa’s Bad Birthday
Jeanne Willis and Tony Ross
Andersen Press
Boa is anticipating his best ever birthday. He’s invited his friends to join him and wonders what gifts they might bring. But Orang-utan’s outsize parcel and the presents from Monkey, Jaguar, Sloth and Ant Eater are all disappointments.

Then his mother announces the arrival of Dung Beetle. Her present will be a pile of – – – – thinks Boa. He’s right of course but inside that stinky dung ball is a small seed and from that seed sprouts something very special that in due course, becomes the perfect place for a Boa to hang around in. The moral of this story is, ‘Never turn your nose up at a stinky present; you never know what delights it might hold in store.’
The sight of Ross’s Boa, sporting his conical party hat and showing a whole range of expressions from sobbing despair to snaky smiles is a real treat as are his depictions of the other animals bearing their self-centred offerings.
The understated humour of Jean Willis’ straight-talking text is the perfect counterpart to Ross’ illlustrations.
The Willis/Ross partnership just goes from strength to strength.
Buy from Amazon

Captain Beastie’s Pirate Party
Lucy Coats and Chris Mould
Nosy Crow pbk
Join the disgusting Captain Beastie as he counts down the five days left till his birthday while engaging in his unpleasant habits. When Saturday dawns the Captain wakes early and gets a big surprise: all his unsavoury clothes have vanished over night. An even bigger surprise is to follow though – a scrub in a large tub courtesy of his long-suffering crew. 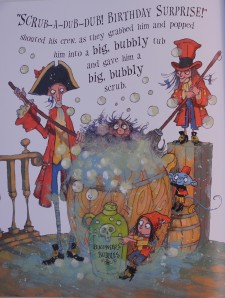 Then, after a detangle and a towel wrap, our squeaky clean Captain spies a large parcel wherein awaits a spanking new pirate suit and hat. Time for some celebratory singing, cake and other tasty tidbits. ‘Oops!’ What’s that you’ve spattered all over your new suit Captain?
Avast! me ‘arties; hasten aboard for a splendidly riotous romp with marvellously Mouldy illustrations dotted with suitably disgusting details of Beastie’s detritus and a host of other nasties. Miss the Captain’s party at your peril.
I suspect shouts of “again” will be the order of the day where this one is concerned.
Buy from Amazon

Find and buy from your local bookseller:http://www.booksellers.org.uk/bookshopsearch